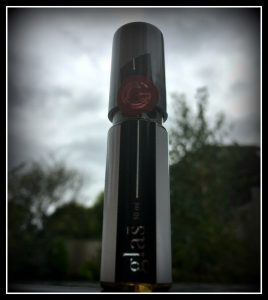 Today I’m reviewing some Pound Cake by Glas Vapor. Glas originate from LA, United States and their juice is sold pretty much everywhere worldwide. They have 6 flavours in this range, as well as a few other lines of juice running alongside.

This E-liquid is described as marked by its creamy and balanced flavor. This liquid captures that same and subtle taste; with notes of fresh citrus and vanilla on the inhale that are followed by hints of warm cake and lemon zest on the exhale. My bottle is the 10ml TPD compliant bottle. The plastic bottle is quite easily squeezable so no pressing with pliers to get the remains of juice through the nozzle. I had a big glass bottle of a Glas liquid last year, and, although this is in plastic bottle, it still keeps the same unique style of labelling that Glas produce. It came in a small cardboard box with all the relevant TRPR/TPD warnings leaflet inside. It’s in a 35/65 PG/VG ratio mix.

Smelling from the bottle, I get a sweet cake smell. I was sure of picking up a cinnamon scent (not a fan of cinnamon) but could just be the vanilla. Not really picking up the lemon. My bottle has steeped for a good few weeks, so should be fine to get all the flavour now.

On vaping, it’s really a unique juice. This isn’t a run of the mill Lemon Tart or similar. It’s a Lemon vanilla pound cake with a very different distinct taste. You first get a vanilla taste along with a well rounded cake flavour, and on exhale a very unique citrus Lemon. To me, it’s not over sweet and could be vaped all day, but still enough flavour and sweetness to make it a very nice juice. The Lemon isn’t over the top and compliments the vanilla and cake well when vaping. Cloud production is still good at a slightly lower VG compared to others. I wanted a good cake vape, and didn’t go wrong with this one!

Keep track on the blog to see more from Glas in the future.