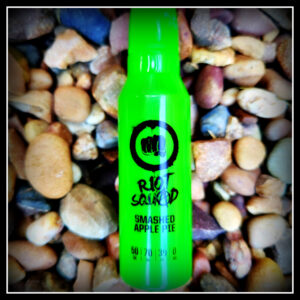 Today I will be giving you my review of Riot Squad’s Smashed Apple Pie. Riot Squad is a hugely popular UK E-liquid manufacturer based out of Milton Keynes. Known for their punchy flavours and unmissable social media presence, they have understandably earned themselves a significant following in the vaping community.

Smashed Apple Pie was my own personal introduction to Riot Squad, and to dessert vapes in general. Prior to this, I have always bought and used fruit-flavoured vapes as in my mind they were the safer option. And boy was I missing out!

The E-liquid itself is packaged within signature Riot Squad bullet bottles, the colour of which is aligned with the juice flavour. Smashed Apple Pie comes in a green bullet bottle (as in green for green apple), with no removable label. Instead, all the information about the liquid is printed in black lettering on the bottle itself. The presentation is rather understated and yet memorable – I quite like this style as opposed to very loud labels where it becomes rather difficult to find the information I need. It is clear and to the point.

The liquid is clear in colour and the shortfill bottle containing a 70 VG/30 PG mixture of zero-nicotine juice, has enough space for a nicotine shot as desired.

That wonderful apple pie aroma hits you as you open the bottle. Personally, I could not believe this E-liquid had managed to capture the scent of a warm apple pie: I could smell sweet ripe apples with lashings of vanilla. It absolutely smelled heavenly and I could not wait to vape it!

One word: Amazing. The taste of sweet apples come out on top of a buttery pastry base on the inhale, and the creamy vanilla follows on the exhale. The flavour profile from Riot Squad says that it is “an apple pie gone rogue. Deliciously delinquent flavours of busted butter crust, hot apple and a hint of wicked vanilla, packed into a bullet!”. I could not fault this flavour description one bit as it does describe my vape experience with it perfectly. Just a fantastic, moreish vape. On a scale, I would give it 9.5 out of 10 marks.

At the time of writing this review, I have learned that Riot Squad are discontinuing this flavour and are running down stocks remaining in retailers. I am not sure why though, as this flavour is one of the most special ones out there. One thing is for sure: I will be filling my stocks with Smashed Apple Pie because I could truly vape this for a long time. Grab a bottle of this while you can!