Another hardware review today and this is the Drag 3 kit by Voopoo. This kit was supplied by the folks over at Health Cabin. Health Cabin sells a massive range of vaping hardware, some decent E-liquids and you can also pick up some tech electronics over there. The prices shown will drop once you register an account and although based in China, shipment is very quick I’ve found so far. There is also some sort of sales or discounts going on there, so well worth checking them out when you’re in the market for a new bit of kit.

The Packaging and What’s in the Box? 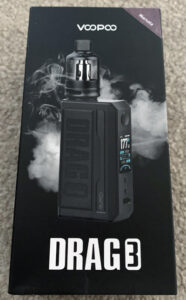 Voopoo’s Drag 3 kit is supplied in a Black cardboard box with an outer sleeve. The top/front of the sleeve has the printed ‘Voopoo Drag 3’ title with an embossed image of the Drag 3 in front of a vape cloud. Over on the top right is a small etched part, printed with the colour of the device inside.

The underside of the sleeve/outer box includes the printed box contents, warnings, Voopoo’s contact info, warning graphics, and a sticker with the serial number for the device. There is also a scratch-for-authenticity label where you can check out you’ve not been sold a shoddy copy (are they even still a thing?).

Inside the box, on the top in felt padding is the Drag 3 device and the TPP pod tank. Under the padding is a branded Drag 3 thin box that includes; a type-C cable, user manual, and two sealed coils. One coil is the TPP-DM1 rated at 0.15Ω and the other is a TPP-DM2 coil rated at 0.20Ω. 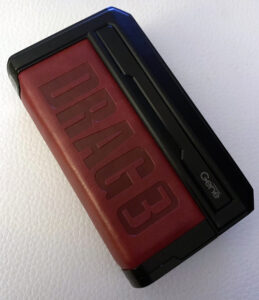 The Drag 3 powers with 2 x 18650 batteries and runs from 5W-177W. The device measures 8.6cms length, 5.2cms width with a depth on the screen side at around 2.2cms. That’s without a tank attached. It weighs in at approximately 118g without batteries.

The device is made from Zinc Alloy and PU Leather. The PU Leather panel wraps both sides and around the back of the Drag 3 and has etched in branding. The back of the device, at the top, has a small panel with an etched ‘Drag’ and also has an etched in ‘Gene’ on the alloy on one side. The top of the device has the 510 situated at one end and a slide-back door is at the bottom for the batteries. The front side of the Drag 3 has the main power/fire button at the top above a 1.08-inch colour TFT display screen. Under the display is the up+/down- buttons above a Type-C USB port.

To power on or off the Drag 3, it is the usual 5 fast clicks of the fire/power button. The wattage is simply adjusted by the up and down buttons. The device can be locked by holding the fire/power button and the up/+ button simultaneously, and the same again to unlock. The puff counter data can be reset by holding the power/fire button and the down/- buttons simultaneously.

The Drag 3 runs on Voopoo’s Gene Fan 2.0 chip and fires up to 177Watts. There are 2 main modes that can be changed by fast clicking the fire/power button 3 times. These are SMART mode and RBA mode. SMART mode can be used when using the PnP coils and will set automatically at the best wattage range (this was adopted from other Voopoo devices). RBA mode is the user-defined wattage so you’re free to set power from 5W to 177W. There is a third mode when using in RBA mode and that is SUPER mode. This is for low ohms coils and will give more firing speed over 80 watts on the device. The device also offers use for temperature control.

The colour display screen shows all the info you need including current mode, current wattage, battery levels, coil resistance, voltage, puff time, puff counter. There is also a graph at the bottom that simulates the amount of vape per puff. You can flip the screen from a portrait view to landscape side view by pressing both the up/+ and down/- buttons simultaneously and holding the power/fire button once selected.

As usual, being a regulated device, the Drag 3 offers multiple protections including overtime and short circuit protection. It is updateable should Voopoo release updates for the chip, by connecting the USB end of the cable to your computer.

There are currently 5 colours available for the Drag 3 (I sense Voopoo will follow with more options). The colours are only on the PU Leather and they are Marsala (Red as reviewed), Smoky Grey, Classic (Black), Sandy Brown and Prussian Blue. The Blue and Grey options have a Silver alloy body while the others are Black. This also applies to the main colour of the pods in the kits.

The Drag 3 kit runs with the new Pod and Coil system that Voopoo released called TPP which is included. It is more like a PnP version 2 using slightly fatter pods and bigger coils. The kit has the 510 adaptor included that screws into a 510 and the pod just slots in via magnetic connection. This is the same as the PnP system and you can actually interchange the TPP pods with the PnP pods and vice versa, should you already be using PnP pods.

Unlike the PnP pod, the TPP pod has a removable drip tip. An 810 size tip with O-rings should fit fine. At the top printed onto the TPP pod is ‘Adapt TPP Coils’ and ‘Designed by Voopoo’. Along with the TPP pod, is a matching 510 adaptor which the TPP pod just slots into. This can then be used on other devices with a 510 port. You can also simply slot the TPP pod into other Voopoo devices that use the PnP system like the Drag X and S. Likewise, you can slot your PnP pod into the adaptor and use on the Drag 3. The 510 adaptor has adjustable airflow via slots on each side. You just turn the ring to close off or open airflow.

The new TPP coils by Voopoo are so far, purely for direct lung vaping. Two low resistance coils are supplied in the kit. One is the TPP-DM2 which is 0.2Ω and the other is the TPP-DM1 at 0.15Ω. Both of these coils are mesh and have large dog-bone shape wicking slots at the bottom. Voopoo recommends the TPP-DM2 run at 40-60W and the TPP-DM1 running 60-80W for best performance.

When I first saw pictures of Voopoo’s Drag 3 device, I was disappointed. Obviously, I hadn’t used it then but the design disappointed me a lot and would’ve put me off rushing off to order one on release. To me, Voopoo’s Drag releases (albeit the latest pod mods) always had the resin panel. I believe it was one of the first mainstream regulated mods to use it and other manufacturers followed. Sure, it’s only a bit of Resin on a mod, but to me, that was identifiably a Voopoo Drag. Looking at the pictures, it was like a Chocolate Biscuit missing the layer of Chocolate. A little dramatic? Maybe, but you get my point!

I can see what they did, in now replacing the Resin with their later PU leather touch look, which again, other manufacturers followed…. but a Drag box mod without Resin didn’t look like a Drag device for me. Add to that, it was pretty much the same design-wise to the Drag Max mod, but just including a 510 port. Also, at least in pictures, it looked really bulky. Yep, I wasn’t too keen at first!

When I received the Drag 3 kit for review, my initial thoughts changed somewhat on opening the box. It’s not too big at all and a lot smaller than I believed it to be. The Drag 3 device without a tank on top is pretty much the same size as a Billet Box, and around the same weight with Batteries loaded and a tank on top. It looks stylish and really comfortable in the hand and yes, the PU leather design looks good with it. The Drag’esque contours around the other side are also stylish and reminiscent of the previous Drag (box) devices.

The screen display is brilliant and a step forward from the previous Drags. It nicely lights up with all the details clearly laid out and easy to read. There is the option as mentioned of flipping the screen orientation sideways, Voopoo is calling these two themes. ‘Iron’ theme is the usual portrait view and ‘Core’ is the landscape (differently laid out) theme, though I must admit that didn’t really appeal to me and left it in the usual ‘Iron’ theme. The option is there and works well if you prefer the different view though.

Alongside the TPP Pod tank and TPP coils, it gives a superb vape. A really cloud-filled flavoursome vape and the Drag 3 is so responsive when firing on the new Gene chip. The coils wick amazing well with the larger wicking ports and during using this kit, I haven’t experienced any flavour drop on either coil as yet.

So if I’m cornered on some pros and cons…

If you’re in the market for a decent kit that gives a great direct lung vape with the TPP pods, then you don’t really have to look much further than Voopoo’s Drag 3 kit. If the pods don’t interest you or primarily a mouth to lung vaper, you can check out Health Cabin and purchase the Drag 3 mod on its own for use with your own tanks and RDA’s.

You can buy the Drag 3 Kit by Voopoo via the links to Health Cabin at the start of the review. Remember to register an account there to be displayed at the best price! To celebrate Chinese New Year, they currently have a 20% off code running from the 8th-18th February 2021. Just type CNY2021 during checkout in the promo code box to receive the discount. Thanks for reading!