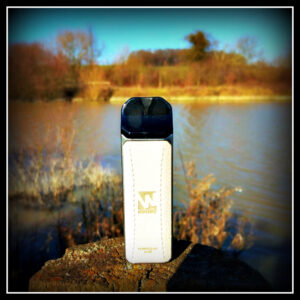 A little pod system review today and this is the Manik Mini by Wotofo. This pod kit follows the release of its bigger brother; The Manik. A rebuildable system in the Manik family (the SMRT kit) to follow in the next little while, but for now, let’s have a look at this little kit.

Wotofo has been continuously releasing brilliant vaping hardware over the years and more recently putting out some great pod mods and kits. You can pick up their products on the Wotofo web store or find vape stores in your country carrying the Wotofo brand.

The Packaging and What’s in the Box? 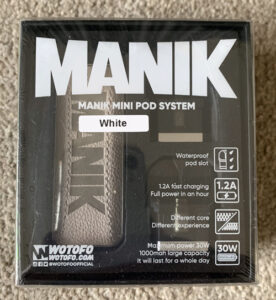 Wotofo’s Manik Mini pod system is supplied in a cardboard box with a clear top lid. The top lid is printed in white and includes the title, Wotofo branding, and four key features of the device. A label is stuck on with has the colour of the Manik Mini inside.

The sides of the box have printed Wotofo/Manik branding and printed box contents. The top side of the box has a bar-code label and the scratch-for-authenticity label.

The bottom of the box has printed warnings, warning graphics, and Wotofo’s contact information.

Inside the box has thick felt padding with the Manik Mini Device and two pods next to it. The padding lifts up and underneath is the mini-USB charge cable and user manual. 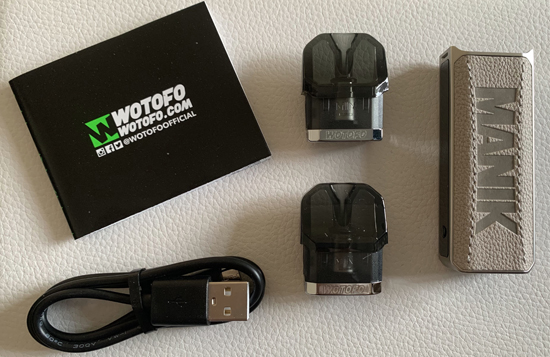 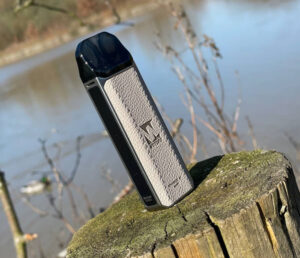 The Manik Mini by Wotofo is a small MTL pod system using refillable pods with built-in coils. It runs on the Nexchip by Wotofo and is an auto draw device. The internal battery is rated at 1000mAh and fires a maximum of 30W.

It is a little slimline device measuring in at 9.2cms height, 2.8cms width, and a depth of 1.6cms. Each wide side of the Manik Mini is in stiched PU Leather with the etched Wotofo branding on one side and ‘Manik’ on the other. The chosen colour of the device is the colour of the leather panels attached.

On the thin sides of the Manik Mini are black panels, one of which is the display screen with a single small button at the bottom. The other side simply has ‘Nexchip Inside’ printed at the bottom. On the bottom of the device are a small vent hole and the Mini USB charge port. At the top of the body is an airflow slot on each side. The pod simply pushes into the top and connects magnetically.

To power on or off the Manik Mini, it is 5 fast clicks of the button. To adjust the wattage, you click the button 3 times then use the button to go to the desired wattage. Obviously having separate no up or down buttons, you just click the button working up through to the maximum of 30W and it round robins back to the start of 1W. Leave the button for 3 seconds and the display will stop flashing with the wattage setting in place.

The Manik Mini display is bright and shows the wattage power in the middle. To the left of that is a puff counter above the current resistance. Over on the right of the display screen is the current battery level above the voltage. To reset the puff counter, simply hold down the button for a few seconds. The charge time for the device is listed as 60 minutes.

Wotofo’s Manik Mini uses pods with built-in coils. Two are supplied in the kit. One is the M11 Parallel coil pod and the other is the M12 nexM meshed pod. Both are rated at 0.6Ω. There is a juice port on the side of the pod for re-filling, secured by a rubber bung.

The pods have a capacity of 3ml (2ml for TPD governed countries in the EU) and are made from tough plastic in smoked colour. They simply push into the top of the Manik Mini device.

Overall, I think the Manik Mini by Wotofo is a decent little kit. It’s a sleek nice-looking portable device that is obviously easy to slip in a pocket (without the worry of firing in there) and looks stylish with the stitched leather effect. With the basic settings and the one button, it is super simple to use. The display is the same (albeit smaller) as the NexMini using the same chip and all the info you need is shown. It is comfortable in the hand and during use.

I do normally prefer a button to fire, or at least have the option, but the Manik Mini is very responsive on auto-draw so you don’t really miss firing it that way. Along with the pods, it gives a very smooth vape with decent flavour and good cloud production for the lower wattage ranges.

After using the device and switching between both pods for over 3 weeks with moderate vaping, the coils in the pods are still going strong. I do get slightly better flavour from the M12 Mesh pod but the M11 parallel still offers quite a good flavour. What I did notice is the pods/coils can be fussy with higher VG, so its best to stick with a 50/50 in my opinion. In the time using the Manik Mini, I have had zero leaks and minimal condensation, but that’s probably due to the closed pods with built-in coils.

I do still prefer the NexMini out of the two, because of the replaceable coils, but this is still a great little device. It’s great for a vaper that doesn’t want to muck around with coils and just wants to refill a pod and be done with it while on the move. Also a very decent device for a smoker looking to jump into vaping and get a good mouth to lung draw.

You can purchase the Manik Mini kit direct from Wotofo via the Wotofo Online Store. It is purchasable in a range of leather colour options; Beige White (as reviewed), Orange, Black, Grey, Blue, Red, Green and Gold. Thanks for reading!