Drag X Plus by Voopoo 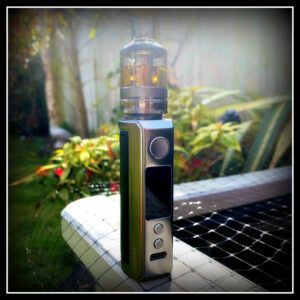 VooPoo Drag X Plus- The Drag X Gets Mightier!

Hello folks! Today, we are going to have a look at the VooPoo Drag X Plus, kindly provided by Chloe from VooPoo (thanks again, Chloe!) for the purposes of a review.

Hot on the heels of the global success that is the release of the Drag X, VooPoo has released the Drag X Plus, with significant upgrades versus its predecessor. Indeed, the Drag X was such a big hit (and continues to sell very well at the time this review was written), that other vape manufacturers have released very similar looking kits to complete. I won’t mention those companies or kits here, but the point I am making is how much the Drag X changed the vaping world by introducing the concept of a pod on top of a powerful sub-ohm mod. If I am not wrong, it hadn’t been done before, and therefore the Drag X broke that invisible barrier between pod mods and box mods, much to critical acclaim by the vape community.

So, you must be asking by now how different is the Drag X Plus versus the Drag X? Is it an upgrade worth making if you already have the Drag X or S? Well, take a dive with me in this review to help you make that decision!
As always, my review will be from my own experience of using the device as a regular vaper, as most of you vapers buying this device will be.

I was sent the retail version of the Drag X Plus containing:

– Regulated by the Gene. Fan 2.0 Chip.
– The new TPP coils environment, a significant step as VooPoo had previously been releasing kits around their well-known and established PnP coils system.
– Ranges from 5W-100W in power
– Input voltage of between 3.2-4.2 V
– Reads 0.10 ohm to 3.0 ohms
– 2A fast charging (I always recommend using external chargers).
– Lightweight and made from zinc alloy and PCTG.
– Dual screen interfaces (Core and Iron)
– Smart Mode and RBA Mode
– The usual vape device protections like over-discharge, over-temperature, battery reverse, and so on. 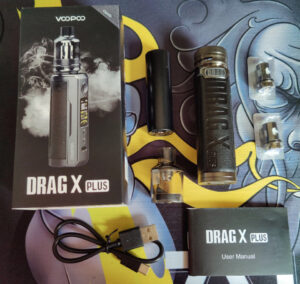 I have to admit that I had a huge smile across my face as I opened my Drag X Plus package!

The kit is packaged very nicely, with a coloured outer box displaying an image of the kit as well as other device details. The contents are housed in a black rigid box, with an inner small black box containing the peripherals like the coils, USB cable, and user manual. I like this presentation much better than the one the Drag X came in: this time, it feels a little classier and more grown-up, if I can put it this way.

As compared to my Drag X, the new Drag X Plus can now house a 21700 battery (yes!!!) and now comes with a 510 connection built into the mod. The pod is also much bigger than the PnP pods from the previous Drag mod/pod generation. Looking at the new TPP coils as well, these are noticeably bigger than the PnP coils, but a tad smaller than coils used in usual sub-ohm tanks.

The pod is clear in colour, which is always a big plus in my book, as I wouldn’t need to squint into the light to see how much liquid I have left. It also comes with a removable drip tip, which was comfortable enough to use. Filling the pod was a breeze even though it is bottom-fill as it is big enough for most shortfill nozzles. There is also nothing in the way of the fill port that may cause a backflow of liquid. I do take note of this especially as I live in a TPD country (at the time of this review) and I have seen where some manufacturers have put the TPD reduces in the most unfortunate of places.

The magnetic cradle/holder that secures the pod in place is well designed as well. It has the contacts for the coils and is where the airflow can be adjusted. There are two big airflow holes at each side, and turning the control one way does the same for both holes, e.g., if one hole was closed off halfway, the same will happen with the other hole.

I have to say that I also liked the fact that the airflow control is now in the pod cradle versus being at the top of the mod itself like in the Drag X. It makes cleaning this part a whole lot easier when condensation inevitably accumulates.

Another great feature of the pod cradle is the fact that you can use your PnP pod or RBA tank on it. Therefore, you now have the cross-compatibility of pods amongst devices. The PnP Pod and RBA fit very well with no play whatsoever. Think of all the options now present before you with the Drag X kit! You can use the TPP Pod, PnP Pod, PnP RBA, or any other atomiser you want to use thanks to the built-in 510 connection on the mod! 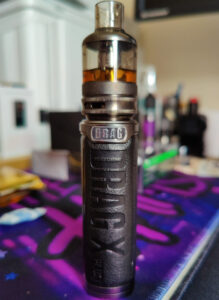 The mod is presented beautifully as a mix of zinc alloy and leather. It has an LED screen with vaping data such as mode (Smart or RBA), wattage, ohms, puff counter and time, battery life). The front of the mod has the up-and-down adjustment buttons, fire button, and USB C charging and upgrade port. The bottom of the mod has the battery* door that opens via a hinge. I was also very glad to see clear battery markers indicating how the batteries should be inserted**. There was no rattle with the battery inside the mod, and the battery door was quite secure.

The adjustment buttons move the wattage in 1W increments, making it quite fast to adjust the power to your preference. Turning the device on (5 clicks, the usual), I was pleased to see that the chip boots up quickly, and as compared to the Drag X that asks me to set the time at start-up, the Drag X mod just goes straight into the vaping screen. Three clicks of the fire button allow you to switch between Smart Mode (where the device detects your coil, suggests wattage, and limits max power depending on the coil) and RBA mode (where there is no coil-dependent max wattage limit). Pressing the up and down button simultaneously will allow you to choose your screen interface, and pressing the fire button + up button will lock all buttons on the mod. The fire button + down button will clear your puffs.

*I always recommend removing batteries and detaching pods from mods when not in use!
**Battery safety: always inspect your battery wraps before use. Any break in wrap means you cannot use the battery and need to re-wrap!

It is a very straightforward mod to use for the average vaper with simple controls and only having the power (wattage) mode. Personally, I do like this approach better because I don’t really use the other modes such as temperature control, and I’d think that most vapers will be in the same boat as I am.

The mod fires blazingly quick, which is another pro for me. Even with a 21700 battery inside, the device itself is amazingly lightweight and completely portable. The screen is crisp and is bright enough to see the usual vaping data.

I used the 0.15-ohm coil first and immediately noticed how much bigger this coil is versus the PnP coils I also use. Not only is the size bigger, but the wicking holes on the coil are massive! However, I soon found out that as I excited as I was with the prospect of getting no dry hits with the massive wick holes, this also meant that the coil was quite prone to flooding. The flooding is not unmanageable; I just need to remember to vaporise the excess liquid or tip the pod a bit to rid of the flooding before I take a puff. Other than this, the coil performed quite well in terms of vape quality and clouds. The flavour is good and I’d rate it at 6.5/10.

The 0.2-ohm coil was next and it performed pretty similarly to the 0.15 coil. I’d rate the flavour of this coil at 6.5/10 as well. Both coils gave me a warm and satisfying vape. And both were also similar in terms of coil life which I would say is around average for pod coils.

The airflow from both coils is quite smooth and plentiful if need be. All in all, it is a good alternative to the long-standing VooPoo PnP coils system.

Another Yay for me for the Drag X Plus! As the title of my review says, this device was everything I hoped the Drag X could be. It has more options for batteries now and I can use a 21700 for longer battery life. It already has a 510 connection, which opens up all possibilities of pods and tanks that I can use on the mod- no need to buy those little 510 adaptors (which, let’s be honest, doesn’t always work)! What impressed me the most is how compact the mod is; it is even shorter in length when I compared it to my Drag X! Lastly, the pod cradle/base can also be used for the PnP Pod or RBA tank, allowing you to use these with the Drag X Plus Mod. So again and with all of these upgrades in mind, VooPoo has really given vapers the freedom to choose here and ultimately, customise their vaping experience.

Where I could see room for improvement are the TPP coils. As said previously, coil life and flavour is good but the flooding I experienced is definitely something that I wish for vapers to avoid. I would suggest using max VG liquids for these coils to minimise coil-flooding scenarios. And for VooPoo, I would suggest revisiting the design of the wick holes of the coils, because these coils are good but the wicking holes are just way too big which, in my opinion, leads to the coils flooding.

I recommend this kit for those who want a portable sub-ohm set-up that can perform like a box mod and can provide a longer vape life as opposed to single 18650 mods. Since having the Drag X Plus, my Drag X has taken a bit of a rest- that’s how satisfied I am with this kit!

To purchase Voopoo’s Drag X Plus kit, you can pick it up on Voopoo’s Webstore, or check vape shops within your country.