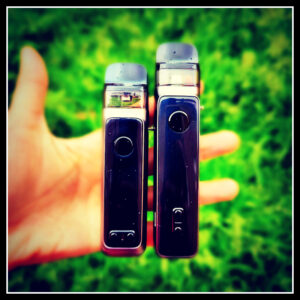 Hello again, dearest vapers! Today, we take a look at two of the next generation of Vinci series pods from VooPoo: the Vinci 2 and Vinci X 2!

Fresh from the release of their Vinci Pod (which I highly rate, by the way), VooPoo has surprised us all with a re-imagining of their very successful Vinci Pod Mod and Vinci X Kits released a couple of years back. 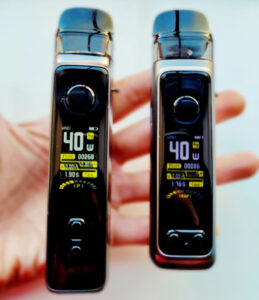 I do think that when they came out, the Vinci Pod kits raised the bar for pod systems at the time. They stood out from the crowd in a lot of ways, including the wide range of beautiful and eye-catching metallic finishes to choose from. The kits were, quite frankly, of quality and very well put together. In fact, I still use the Vinci Pod Mod to this day as a nifty vape device to have when taking a stroll somewhere!

As much as the original Vinci Pod Mods were ground-breaking, there were a few features that I wished the devices had such as more airflow control beyond changing coils to really achieve the draw that I wanted.

So, do the Vinci 2 and Vinci X 2 deliver more than their predecessors? Let’s find out!

We will be looking at both kits side by side in this review. And as always, this review is from my own genuine experience of using the products, which have been generously sent to me by Chloe from VooPoo for review.

The Vinci 2 sample package sent to me contained: 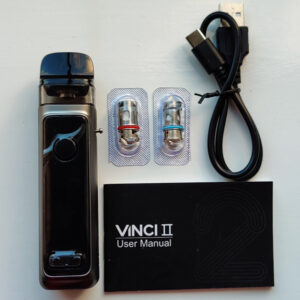 The same kit components can be found in the Vinci X 2 package, with the exception of: 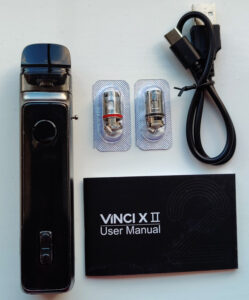 Salient Features of both kits include the below, and contrasted against their first-generation counterparts: 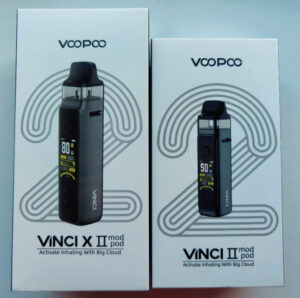 The kits are presented professionally and cleanly from the outside, with a big number 2 at the front of the box. The inside of the kit packaging containing the device and its accessories is presented simply, and is straightforward. I am digging this: no kafuffle is definitely my style!

Kit contents and other information can be found on the packaging, as with most vape devices. Having had boxes of the older Vincis, I must say that the presentation of the new Vinci’s is now a little more mature from VooPoo. The packaging is classy enough and does not feel cheap at all.

A. Cartridge/Pod of Both Devices

The cartridge can accommodate a very large amount of liquid. It is made of PCTG and is fully transparent, which is a huge positive for me as it is dead easy to see the e-liquid levels inside the pod! It is secured to the pod by strong magnets, and it is easy enough to pull the pod off should you need to refill.

The mouthpiece is again reminiscent of the older Vinci series: it is duckbill shaped and is comfortable enough to use, especially or RDTL or DTL.

The side fill port is plenty big enough to accommodate most shortfill nozzles; there is nothing in the way of the fill port that may cause a backflow of liquid. Refilling the pod is easy and mess-free enough as the rubber bung for the fill port can swivel away from the port, giving you greater access when topping up. The rubber bung, however, does feel a little thin to me and I could see this as something that might tear easily from normal use. To this, I wish VooPoo had included an extra rubber bung in the kit’s accessories just in case it will ever be needed.

The coils seat snug inside the pod, and I am happy to report that I have had no leaks from the pod! 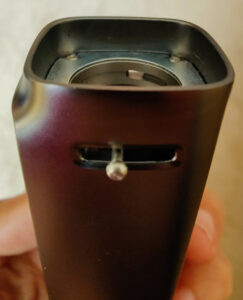 Both mods/devices retain the form factor of the original Vincis, albeit a little more rounded in the corners which makes these very comfortable to handle. Both are made from zinc alloy which lends a bit of weight to them, although I wouldn’t say they are too heavy for what they are. The mods do not have any rattle which again point towards great build quality. Also, the finish of the mods is now resistant to fingerprints, to my relief! Now there is no need to wipe off those grimy prints off your mod!

One side of the mod has the USB-C charging port, and the opposite side has the Vinci logo that is raised a bit from the surface. The backside of the mod is where the different styles and designed can be found: I received the carbon fibre finish for both Vinci 2 and Vinci X 2. The front of the mod has the firm and clicky fire button, LED screen with vaping data (mode, wattage, volts, ohms, puff counter, puff time and meter, battery life), and the adjustment buttons. The wattage can be adjusted by one-watt increments, which again to me is a non-issue, however, there are some vapers out there that may desire sub-watt control of their wattage.

One of the very cool things that is new about the Vinci 2 and Vinci 2 X is that now, both mods present the options of vaping in Smart Mode and in RBA mode, which we have seen in the Drag series. Pressing the adjustment buttons simultaneously will allow you to switch from one mode to another. Personally, I use the Smart Mode for stock coils and the RBA mode for, well, when I am using a RBA. I like a warm vape when vaping high VG liquids and so I do find myself using the RBA a little more than the stock coils.

The same action of pressing on both adjustment buttons will also allow you to select the user interface you prefer, which will be between Iron and Core. Changing the UI doesn’t change anything in how the mod will perform, it is simply a cosmetic preference. I prefer the Iron interface more than the other. With my failing eyesight, I need to see the power (wattage) more than the other vaping data and this is quite prominent in the Iron interface.

Another new introduction to these mods is the true airflow control you can achieve with the device. The mechanism is reminiscent of what we have seen in the Drag series, which a little knob sticking out that you can slide to get to the draw you want. At its tightest and with the MTL coil, I could achieve a nice, medium-draw MTL at this setting- something I could never achieve in the original Vinci series. So as you can imagine, I was quite pleased with that! At its most open setting with the DL coils, the airflow is quite airy I would say. I find myself adjusting this to about halfway with the 0.3 ohm coil at 40 watts, and this just gives me an absolutely beautiful vape! 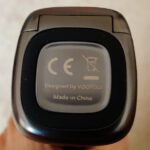 There are marks for battery placement for the Vinci X 2. A part of me wishes that these were indicated in a different colour so that it’s easier to see, however, the negative end of the battery is clearly marked on the battery door and is in keeping with the style of the whole kit. So again, a non-issue for me and likely just my usual paranoia when it comes to battery safety!

These devices use the PnP coils and RBA., and so these will perform as you would expect from your PnP coils.
The 0.3 ohm PnP-VM1 coil (32-40W) is made with mesh and delivers a nice flavour, and is found in both kits. I find myself using this coil more than the other as far as stock coils are concerned as I get a pleasant vape with these.

The 0.15 ohm PnP-VM6 coil (60-80W), found in the Vinci 2 X kit only and also made with mesh, gives a warm and flavourful vape as expected. The trouble I have with this coil, which started for me when I used the Drag X, is that it does tend to leak a little. Not too much that it’s unmanageable, but just enough that I have to dab the coil with a paper napkin after a few puffs. I can live with it but it doesn’t really lend convenience. So I call this my “vape at home” coil.
Both of these coils are cloud-chuckers for sure!

The 0.8 ohm PnP-TM2 coil (12-18W) gives a nice and warm MTL vape at the right airflow setting. Being a mesh coil, I get great flavour off of this, especially with nicotine salts. And I am pleased to say that I have experienced no leaking with this coil! Indeed, this MTL set-up is the one where I can feel more confident of leaving the pod on the mod as it will not leak.

Before we get to my usual “Yay or Nay” final judgement and summary, let’s answer some questions that may come up especially for those who have used the original Vincis:

1. Can I use the original Vinci Pod on these new mods? The answer is unfortunately not. These mods will not be able to house the older Vinci Pods due to the corners being a little more rounded (as mentioned above).

2. OK, but can I use these new pods on the original Vinci Mods? The answer is again, unfortunately not, and that is also because of the change in the shape of these new pods.

3. Well, then, should I even upgrade to these new Vincis even with this lack of backwards compatibility? Oh YES! Most definitely, and let me tell you why.

The new Vinci 2 and Vinci X 2 are absolutely worthy upgrades, in my opinion. I do feel that VooPoo has taken on board the collective feedback about the original Vincis, and that is why these new versions have better airflow control options as well as the Smart and RBA modes. These two features to me stand out the most when I compare my experience with these new versions versus the original Vincis. Now I can achieve the MTL draw I want, and also the RDTL vape I prefer. For those who like tons of airflow, these kits will also not disappoint.

So indeed, both the Vinci 2 and Vinci X 2 are a “Yay” in my book! Some vapers may be enticed with the fingerprint-resistant finish, the increase in power and pod capacity- those are definitely pros too. With these kits using PnP coils as well, there is a world of options for the vaper to customise their vaping experience. These have been certainly a pleasure to use, and are good examples of evolution for the better.

To pick up the Vinci 2 or the Vinci X 2 kits, head over to the VooPoo website or check for stores carrying the devices within your country soon.