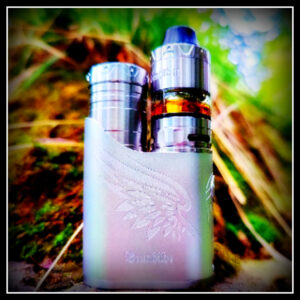 What’s shaking, everyone?! I am back again with a vape hardware review for you all!

Today, I invite you to join me in looking at Vapefly and the German Community’s (formerly German 103) latest release into the vape market: the Brunhilde SBS 100W Kit!

This gorgeous kit was sent to me for review by the very generous vapefam at Sourcemore.com (much appreciated again, Joyi!). If you shop online, Sourcemore is pretty hard to miss, being one of the biggest online vape suppliers in the world. They sell all sorts of vape gear and run promotions from time to time. In fact, at the time I am writing this review, they currently have their 7th-anniversary flash sales going on!

Back to the kit for today- for the experienced vapers out there- I know what some of you might be thinking that we are experiencing a glut of side-by-side (SBS) devices for the past few months. And I wouldn’t blame you, it’s just been one after the other from several manufacturers!

I know some like the style whereas others seem to be a bit “meh” about it. I’m somewhere in the middle of these two groups as my experience in general with SBS mods has been a mixed bag. Some SBS kits really work when everything comes together. What I mean by that is that everything meshing well together, from its ergonomics, versatility to accommodate most atomisers in the market, and overall thought in design. I have used an SBS mod before where the drip tip of my MTL tank was at the same height as the battery cap, so as you can imagine, vaping with it involved contorting my hand in some way so that my lips won’t touch any part of the mod. It wasn’t fun, to say the least! On the other hand, another SBS mod I used was really well-designed in that it complimented my atomisers perfectly, forming a complete workhorse of a kit.

So, with the Brunhilde SBS 100W Kit, I approached my review with great expectations and an open mind. My experience with Vapefly and German 103/German community releases is that they always knock it out of the park in terms of quality and design. As an example, the stunning Siegfried Kit with its review is available here on the blog. The question is – will my expectations be met by the Brunhilde SBS kit?

As always and even though I have used Vapefly + German Community products in the past, my review will be from my genuine experience of using the kit as an average vaper, as most of us are in the vape community. 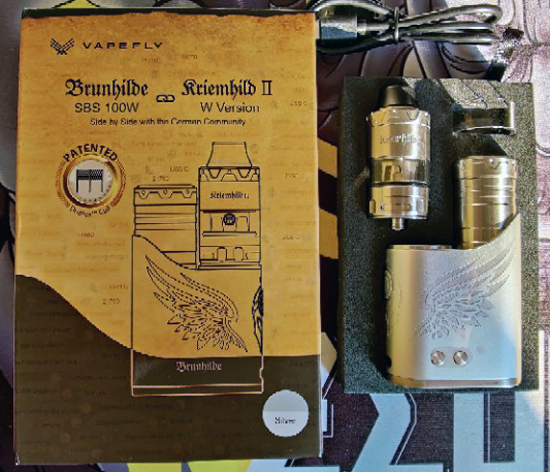 I was sent the retail version of the Brunhilde SBS 100W kit that includes: 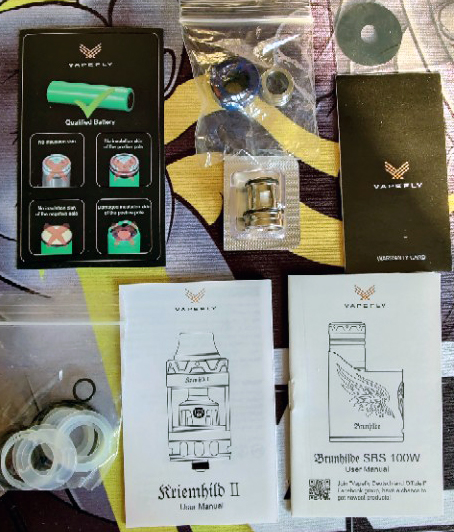 The kit comes inside a box covered by a carton sleeve. The colour, layout, and design of the packaging are familiar, as I have seen this in other Vapefly + German Community products before. An illustration of the kit is up top with kit features and Vapefly’s socials printed around the sleeve. It is interesting that, unlike most kit manufacturers, the kit contents are not listed on the sleeve where I normally expect them to be.

The box inside is textured for that premium feel. The mod, tank, and spare glass sit on a foam tray that has a helpful tab on top to allow you to access the spare parts underneath very easily. I do like it when companies add these little touches to their kits: it’s a small thing but it makes me feel like they’ve put care in how their products are presented. So all good so far, well done to Vapefly here!

My first impression of the kit is just WOW! Especially in the silver colour, it just looks majestic as a unit. The mod matches with the tank perfectly. The kit does have a fair weight to it, which is to be expected being made from stainless steel and aluminium. It’s the perfect weight in my opinion, especially with a 21700 cell inside it. It’s heavy enough to not be wobbly with a full tank and to be carried around comfortably.

As a side note, this kit comes in several colours, and actually includes decorative rhinestones in selected colours (red, rose gold, pink). I thought the rhinestones (real or otherwise) is a nice touch for personalising the kit by adding some bling to it. At least from the photos, they do look a bit swish!

Let me start off this section by saying that despite some niggly quirks (details below), this tank is one of the best sub-ohm tanks I’ve ever used!

Operating it is quite straightforward: 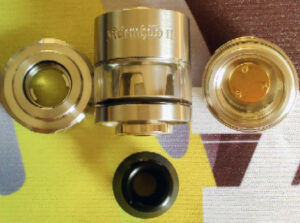 The Kriemhild II (W Version) atomiser just looks sexy, even on its own! The conical 810 drip tip is very comfortable to use. At the base where the drip tip attaches are a couple of ports, which I assume is there so that liquid won’t accumulate in that area and therefore helps to avoid any spit-back. The top cap is knurled nicely and functionally, as in the texturing helps to grip the top cap even with fingers covered in liquid.

The tank body (you know what I mean) consists of metal up top and glass at the bottom. And here is where some people might have a con in that the metal top obscures the liquid level which then risks overfilling. I haven’t had this problem at all in using this tank though, but that is probably down to my vaping habit of filling my tanks only up to ¾ full. 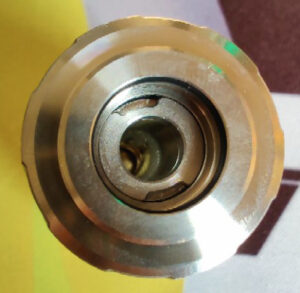 The metal section of the tank body has “Kriemhild II” engraved on it which just adds to the kit’s overall classy feel. Refilling was easy; however, I did find that because both fill holes are covered by silicone, there’s not really anywhere for air to escape to, leading to a tiny amount of liquid collecting at the base.

The base being 25mm in diameter matches the mod exactly. The airflow adjustment ring has just the right amount of resistance to be effective when tweaking the airflow.

Another pro for the tank is that it can be used with DIY options in addition to the stock coils that come with the kit, the rebuildable options being the Kriemhild II RMC and Kriemhild II RBA. I haven’t used either and so I am unable to tell you if they are any good or not- but if you have, feel free to share your experience with us in the comments section below! 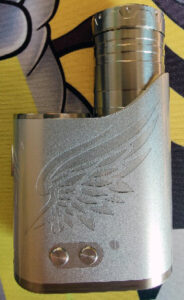 This mod’s appearance is one that will make you go swit-swoo! Its aluminium shell is curved perfectly which makes it so comfortable in the hand. Nothing is printed on it- all the design on it is laser engraved. Wings can be seen on both sides; however, one side has the Brunhilde logo whilst the other side has the adjustment buttons. The front of the mod has a helmet engraved around the fire button, with the USB-C port below it. And at the bottom of the mod is the screen and battery vent holes.

And of course, being a side-by-side mod, the 510 connection is in front of the mod with the battery slot at the back of it. The battery cap has the same textured knurling as seen with the atomiser top cap, a huge pro for this as this detail just makes the kit aesthetically pleasing!

The fire button was OK to use, and it was easy to find as it protrudes a few mm from the rest of the mod. It doesn’t give off any rattle, but it is a little loose for my liking. Don’t get me wrong, the button didn’t misfire or stick during my use, but its looseness is not something I could easily ignore.

The finish of the mod is super sleek, and I especially loved that it won’t attract fingerprints, nor show light scratches easily. 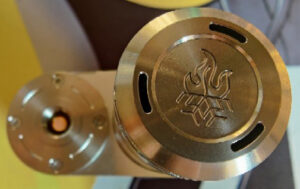 The battery slot has cell orientation clearly marked, which again is a positive. The threaded battery cap was easy enough to use, however, I can feel that it becomes a little crunchy as it screws down to the mod with a cell inside.

The mod’s screen displays a relatively minimal set of vaping data like battery life, ohm load, voltage, and wattage/temperature depending on the mode you have it in. From a menu/functionality/customisation perspective, it offers just a limited number of choices as compared to other high-end mods that are packed with features. This might be a con for vapers that really want to customise how they vape and especially so if using rebuildables.

However, for the atomiser and coils that came with the kit, the modes offered are pretty much what would be needed anyway. It may seem like the screen and mod features are a little simplistic, but I think of it more as minimalistic and geared towards the kit itself. 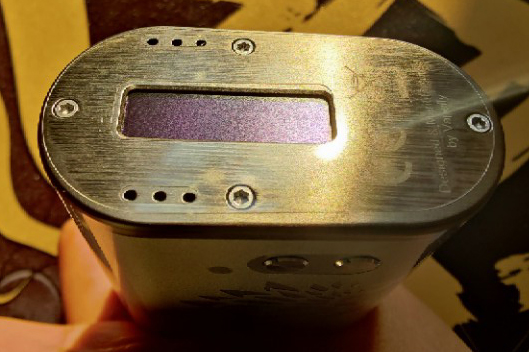 As a quick run-through of controls:

Overall, I was satisfied with the mod for the way I vape. It fires quickly and hits just as quick. It is a beauty to look at on its own and more so with the provided atomiser! 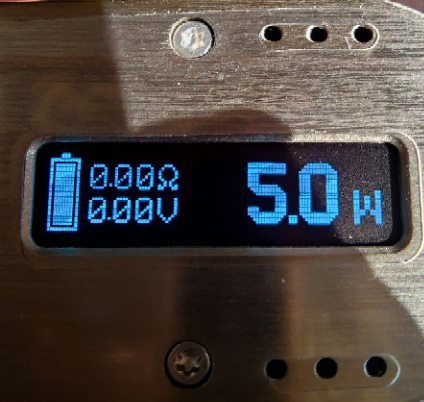 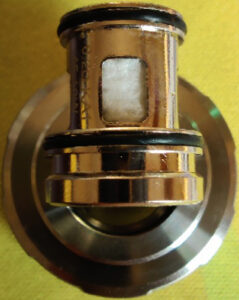 The Freecore Duplex mesh coil (0.2 ohms, 45-60W) was first up. What stood out for me in using this coil is just the outstanding flavour I get from it, even at 45W! Especially when vaping complex flavours, this coil allowed me to pick out different flavour notes during a puff. It also keeps up with chain vaping very well- no dry hits whatsoever. Cloud production is decent too, although of course this also depends on the liquid used and power output selected. The vape is warm enough for me at 55W- what I found to be my sweet spot for this coil. I’d rate its flavour to be 8.5/10- it really is THAT good!

Next in testing is the Freecore mesh coil (0.3 ohms, 40-55W). Now, the flavour from this coil is decent, however not as good as the Duplex mesh coil. That may have to do with it operating in a slightly lower range, and therefore the vape wasn’t as warm. Saying all that though, the coil still performed well in all aspects, and I’d give it a 7/10 flavour rating.

Coil longevity for both coils is also acceptable, with both coils still going strong for me after 2 weeks of testing this kit and using all sorts of e-liquid with it, even those that I know to have sweeteners.

Hmmm this depends on what kind of vaper you are. For me, this is a clear Yay! And that is because I use my kits in power mode the majority of the time.

If you are a vaper into power curves and other functionalities seen in other mods, then this mod may not be for you.
Apart from this kit fitting well within my vaping preferences, the kit is finished and presented exquisitely. It just screams quality from the first glance!

It also hasn’t let me down from a performance perspective despite some little things to be mindful of as discussed in my review. I loved using this kit and will continue using it for sure!