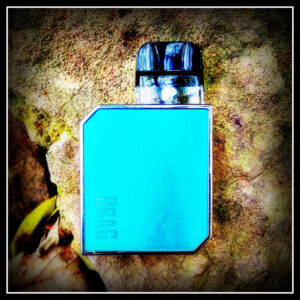 What’s shaking, my vape family? Yes, I am back with another hardware review for you today courtesy of the kind people at Voopoo (thanks, Aimer!) who have sent this kit to me for the purposes of a review.

What kit, I hear you ask? Well, it is none other than the latest and greatest in the esteemed Drag series by Voopoo: The Drag Nano 2!

If you have been vaping a while, you might remember the Drag Nano 2’s predecessor, the Drag Nano, from a few years back. It was released when resin was en vogue in the industry, so much so that that device came in various resin finishes (much to my chagrin). It was small, compact, lightweight, used refillable & replaceable pods, and was quite user-friendly. It was a kit aimed at beginners and experienced vapers alike.

This review won’t be a side-by-side comparison of the Nano versus Nano 2, but I will mention where there are significant changes in the Nano 2. I think this will be helpful in case you are deciding which version of Drag Nano to get, especially as the first version is increasingly listed in clearance sales. 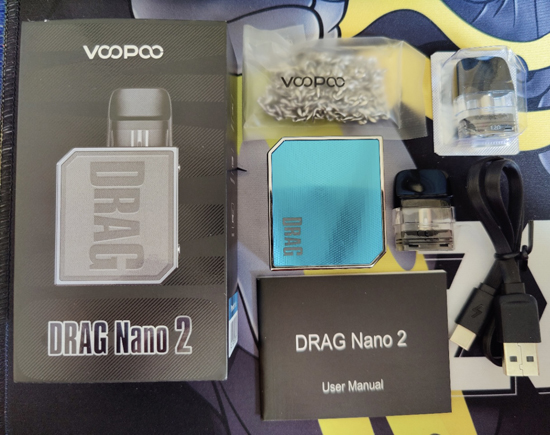 The kit packaging is as per Voopoo’s usual style of this year, with box contents, kit features, Voopoo’s socials, and standard warning language written around the box. The front of the box is stylised with an embossed figure of the kit, and then the word “NANO” is embossed and running from top to bottom. Simple and yet funky enough to stand out, I like it!

Before going into the main kit components, I have to say that as a whole, and apart from its overall shape, the Drag Nano 2 bears very little resemblance to its predecessor in my opinion. It is much smaller and uses a completely different kind of pod. There are also major changes (upgrades) done in this version, so let’s go further into this review to see what these are! 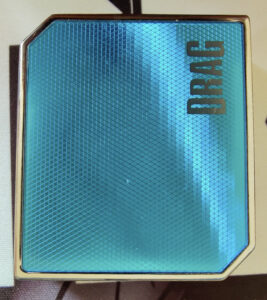 The mod is much, much nicer now in my eyes without the resin finish. The mod I received has a finish called Powder Blue, with shimmering panels on its front and back. Around the mod is a zinc alloy frame where the panels appear to be stuck on.

Gotta say, I absolutely love the finish and colour of the kit I received. Its panels sort of play with the reflection of light off it, which makes for quite a visual spectacle! No, it doesn’t glow or light up or anything of the sort, but you’ll know what I mean when you get your hands on one of these.

I think Voopoo might have read my moans in previous reviews about branding, as the Drag Nano 2 has relatively minimal branding now with “Voopoo” written on one panel, and “Drag” on the other. Branding doesn’t span the entire mod’s body now, which is a huge pro for me. Subjective, I know, but I like my kits understated!

This kit is super easy to use: 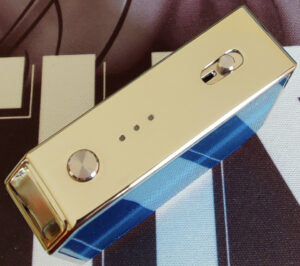 Apart from the now adjustable power levels as an upgrade versus the original, this mod now also features adjustable airflow. How cool is that for such a tiny device! This is a huge pro for me, as now I can truly customise my vaping experience alongside the pod options and power adjustments available. The airflow control is on a slider with a knob that protrudes just enough for grip. And this airflow control actually works! When fully closed, it is what I would classify as a super tight MTL, and so I have my airflow around halfway closed to achieve the kind of draw and warmth I like. I think that it was crucial for Voopoo to get this feature 100% right as the device is auto-draw only. If the airflow had too much air leakage, then a medium or tight MTL won’t really be possible, so I had to tip my hat to Voopoo for getting this right especially for MTL users.

The mod has the USB-C port at the bottom, and it has a couple of slots to allow the use of the included lanyard.

The kit comes with Drag Nano 2 Pods, or what I would call Vinci Pods since I first experienced these in reviewing the Vinci Pod Kit. 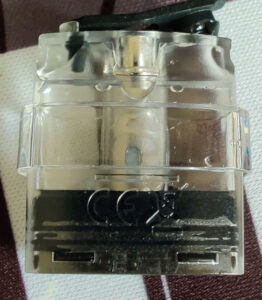 But these pods aren’t exactly like the Vinci Pods, although they are compatible with the Vinci Pod system too. Sure, these are made of PCTG, holds 2 mL, has clear windows for seeing juice level, and is also top-fill. But one thing that Voopoo has changed versus the Vinci Pods is that there is now a rubber bung to be removed and replaced every time you fill. Now, I didn’t really experience any leakage or spit back with the Vinci pods, bar the expected minimal condensation with use, but I think the addition of the rubber bung does make a difference in that I didn’t even experience condensation with the Drag Nano 2 pod at all in the time that I’ve tested it. Again, bravo to Voopoo here for improving what was already an impressive pod in its class!

The 0.8-ohm pod is vaped with superb flavour and warmth at the highest power level (and airflow halfway closed), which is how I like my MTL. I’ve used salts and freebase on the pod with no issues whatsoever. Now, I know that some people might try RDL with this pod, and it is possible. But to achieve that, you’d have to fully open the airflow which will cool down the vape off of this pod. So it’s possible, albeit a relatively cool RDL vape.

The 1.2-ohm pod gave a slightly more restricted and also slightly cooler vape at the highest setting, although with the same spot-on flavour. This pod will be for those who like a cooler MTL vape, as I am aware that some MTL vapers are in that camp. I have no information as to the exact wattage range of this pod, but per my testing, it feels like it’s around 12W or so (although I could be wrong).

A definite Yay for me, this one! I mentioned at the start of the review, that in case you were deciding which Drag Nano to get, the Drag Nano 2 is the one investing your hard-earned cash on. It’s improved on so many fronts versus the original and combined with the Drag Nano/Vinci Pods, you will be sure that you’ll be in for a satisfying vape!

I tried really hard to find cons with this kit, but the most that I can come up with is if the “Drag” branding was removed, which isn’t really a con as it is purely my preference (shape alone speaks for itself, in my eyes).

I feel that this kit is still aimed at beginners or new switchers to vaping. Even with the flexibilities added for power and airflow, these are not too complicated or daunting for newbies to learn and these actually allow them to fine-tune how they would like to vape. It is also perfect for current vapers who may want a tiny, portable, and reliable flavour banger when travelling or just as a spare.

And again, my huge thanks to Voopoo for allowing me to review this beautiful little beast of a kit! Visit the Voopoo Store to purchase via the link at the start of the review.