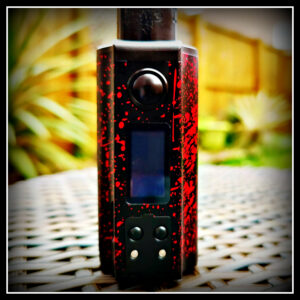 Welcome to my first hardware review for 2022, my lovelies! Today we will be looking at another “oldie but goodie”- the Dovpo Topside Dual SE 200W Squonk Mod!

This mod was sent to me for review purposes from Fasttech.com. Fasttech stocks a massive amount of vaping gear and supplies that are priced very well as compared to similar websites, especially random spares that we all need from time to time. Do check them out for your vaping needs as most items ship for free or at low cost, making them a fantastic choice for us vapers!

So yes, we are going to be looking at a squonker, for a change. It’s been a good while (or at least it seems) since I’ve tested a squonk mod. However, seeing as how the Topside Dual (let’s reference it with this name for brevity’s sake) is so popular within the vaping community, I thought this review will still be relevant for those who are already into squonking or those who are entertaining the notion of trying it out.

The mod itself was released a few years ago by now, but it still is regarded as one of the best-regulated squonk mods released, despite the number of battery door issues that have been raised with it. Indeed, this issue affected several users, so much so that Dovpo even have a blog article about it (https://dovpo.com/blogs/news/the-topside-battery-door-issue) advising users on how to handle the issue. And with this knowledge, you know that I will test out the battery door too!

The mod was created by Dovpo in collaboration with The Vapor Chronicles (TVC), a reviewer on YouTube who has also contributed to or created a lot of other popular vape devices including the Wotofo Profile Unity RTA.

I was sent the retail version of the Dovpo Topside Dual Mod containing:

The package contents are pretty much straight to the point as to what you would need to get going upon purchase. I could wish for another spare bottle cap but overall, I think what Dovpo have included in the package is just right. 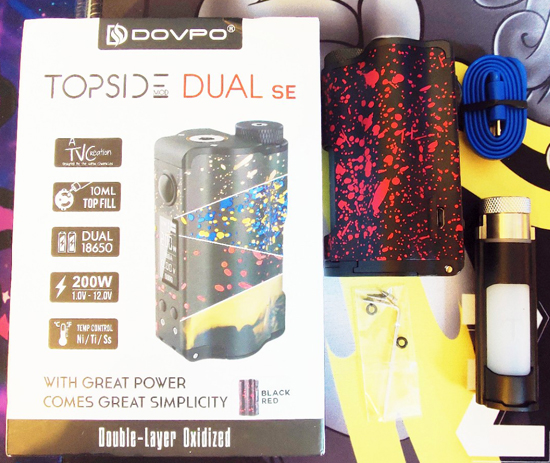 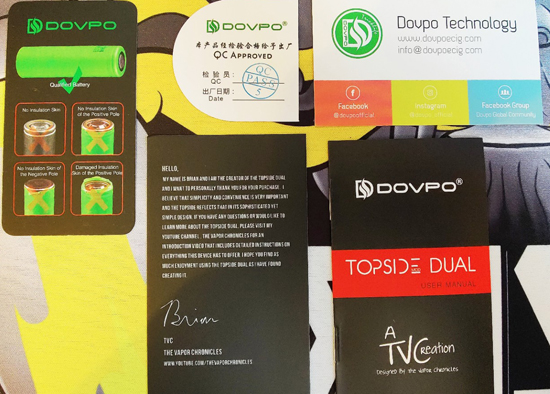 I did find the packaging of this one interesting. Apart from the usual manufacturer info and package contents, I also found on the outer box a section giving a warning and a set of instructions on how to re-insert the squonk bottle back into the mod (it must be done with the mod upside down, else e-liquid might seep into the battery compartment). That is quite useful, in my opinion, especially for users that may not read the full user manual where instructions like these would normally be in.

The outer box also has some inviting marketing information about the mod (about the mod having extended power and battery life versus the Topside), which is again something that I don’t normally see in outer boxes. The mod and its accessories sit atop a foam tray covered in crushed velvet. Lastly, the front of the outer box has a coloured photo of the device, with the mod portraying the different mod designs available. Nice touch, I thought! 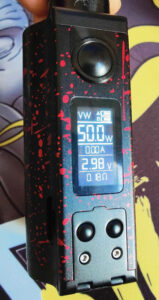 The mod is made out of zinc alloy and feels extremely solid in the hand. It is also a mod that is heavy and bulky, especially with the two 18650 cells installed, and so this is something to bear in mind.

The Black/Red mod design I received is actually quite nice and easy enough to match my existing RDAs. The finish is smooth, and perhaps a little too smooth that I did wish there was a little more grip to help the hand support the mod’s weight. Branding is my perfect kind of minimal, with the brand and model appearing around the 510 plate and TVC’s brand on the battery door. Well done here, Dovpo!

The 510 plate is on top along with the squonk bottle cap. The squonk window is behind the mod, and with the fire button being in front, I found myself thumb-firing this mod whilst using my index and ring fingers to squonk. It’s comfortable enough to use for me, but perhaps not as universally ergonomic as other dual 18650 mods out there. And especially so because of its sheer weight, folks with grip problems may find it challenging at times to operate single-handedly.

The screen and adjustment buttons are also in front of the mod. Vaping data such as the operating mode, battery life, wattage/temperature, amps, volts, and ohm load can be found displayed on the screen. 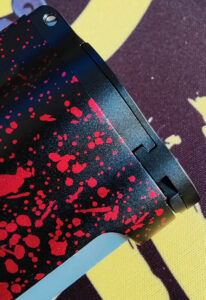 And now, the infamous battery door. Contrary to what I expected, I found the door to be well made, with battery polarities clearly marked. It doesn’t really wiggle or flap about. The only comment I have with it, and one thing to take note of to ensure the longevity of this part, is that one needs to make sure that everything is perfectly aligned before sliding the door into place. Forcing it to close without this perfect alignment will lead to issues. And by perfect alignment, I mean ensuring that the squonk bottle is nested precisely into the mod as this is crucial to the battery door closing correctly. Other than that, it does take some force to close the battery door, but once it is closed, it is solid and doesn’t threaten to come loose. 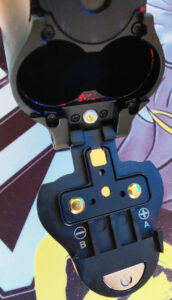 Squonk performance: this is this mod’s selling point for me (apart from having dual 18650 cells!). Squonking is absolutely fuss-free, especially with the top fill system employed. It didn’t fill my RDA too slow or too quickly; it was just right. The squonk bottle itself was also soft enough to be responsive and yet sturdy enough to last. There’s also hardly any leaking that can be found inside the 510 connection of the mod that does sometimes happen with squonkers.

Indeed, no leaking anywhere in the squonk bottle compartment! 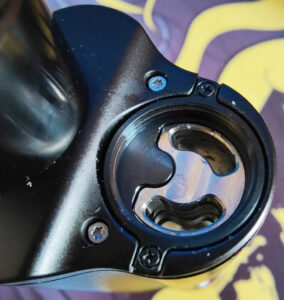 Vaping performance: the mod fires quick enough, with the wattage adjusted in 0.5-watt increments in short presses and scrolls quickly in 1-watt increments when pressed longer.

Operating the mod is simple enough:

Battery life seems to be managed effectively by the mod too. When I used this mod exclusively for a day at 50-55 W, I didn’t really need to replace my batteries until the next day. And that is pretty good battery management in my experience of dual 18650 mods!

Refilling and maintenance: The squonk bottle is filled via a top cap with very effective knurling for grip. The fill holes are recessed inside the mod, thereby helping avoid liquid spills from filling, and they are also big enough to accommodate most e-liquid bottles in the market. The squonk bottle unit itself can be uninstalled from the mod by opening the battery door and pulling it out with the bottle cap undone.

If one desires to disassemble the whole squonk unit (for thorough cleaning), the Allen key included in the spares bag can be used to undo the screws attaching the squonk bottle to the plastic frame/base. It’s all pretty easy to assemble back to after cleaning. This is another major pro for me because I normally do rinse my squonk bottle well especially when changing E-liquid flavours.

This mod is a great dual 18650 battery squonker, and so does get a Yay from yours truly. Even with its niggles like the weight and ergonomics, it still is a great choice for vapers who want to squonk for longer and for higher wattages. It’s also a good beginner squonk for those wanting to get into it due to its intuitive operation and its fuss-free squonking.

Although, I would strongly suggest investing in the newer models with the battery door base, just in case a problem comes up with its battery door.

Once again, my deepest thanks to Fasttech.com for providing this mod for my review! To purchase the Topside Dual SE from Fasttech, check out the links at the start of the review.