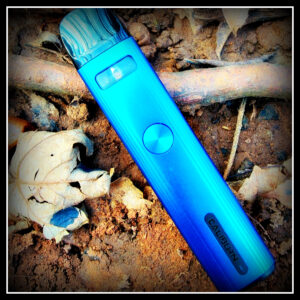 Hello, folks! Jen here, back again with another hardware review to feast your eyes on!

To some of those in the industry, Uwell seems to have mastered the art of creating a pod kit. And today, we are going to be looking at their latest addition to their ever-growing Caliburn line of devices: the Caliburn G2 Pod Kit! This device was kindly supplied to me by Sourcemore.com for review purposes. Sourcemore is one of the biggest vape retailers based out of China. They sell pretty much everything you could ever need for vaping, and they run crazy sales from time to time. Additionally, the code CG2P gets you a cheeky discount off this device at Sourcemore.com. So be sure to check them out for your vaping supplies!

It just occurred to me that this is my very first Uwell product for review, and so let’s look at the manufacturer in brief, shall we?

Uwell has been around since 2015, in the boom of vaping worldwide. Arguably, their best-sellers are pod devices such as those in the Caliburn series. Indeed, and so much so, that they have released a total of 8 (that’s right, 8!) varieties of Caliburn devices, including the original Caliburn from 2019. I would even dare say that the Caliburn is their flagship product. However, they have also made other vape devices such as disposables, and box mod kits like the Valyrian III.

I do own the original Caliburn, and at the time of its release, it was a revelation! The flavour it gives is the most special thing about it for most vapers, and if you trawl through vape forums, they are still recommended as an ideal starter kit for new vapers. Personally, I did find the Caliburn a little loose on the draw, and so welcomed the later Caliburn additions that have airflow control like the Caliburn G2.

As always, I will be reviewing this kit as an average vaper, as most in our community are.

I was sent what looked to be retail packaging for the Uwell Caliburn G2 kit that included: 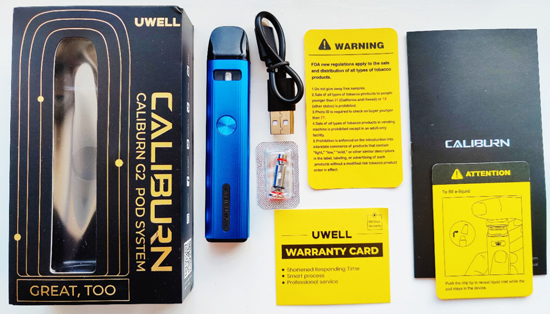 The box containing the kit is minimalistic and yet packed with information! On the sleeve, there is a transparent plastic window allowing you to see the device. Uwell’s socials and manufacturer information, warnings, kit contents, and a diagrammatic description of each included coil can be found on the back and around the sleeve. The kit and its accessories sit atop a plastic tray that covers the accessories underneath. All in all, a compact way to package a slim starter kit. 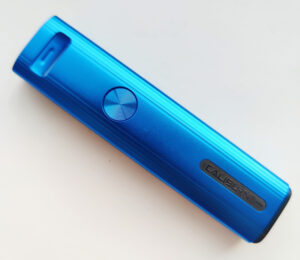 Aluminium as the main material of choice for the device makes this super-duper lightweight. However, that doesn’t mean that it can’t hold the weight of a full pod and stand upright; it is stable on a flat surface. The finish of the device is smooth and is fingerprint-resistant. The LED light to indicate battery life and charging can be found in front of the mod near the bottom.

As for branding, this is as minimal as it can get with “Caliburn” written stealthily near the LED light. I bloody love it! Uwell can be comfortable enough with little branding because there is no mistaking this device for anything other than a Caliburn as it retains the same form factor and quite a similar appearance versus its predecessor.

The device has only one button for firing and turning the device on or off (5 clicks). The USB port is at the bottom of the device, which does mean that you can’t charge it in an upright position. The pod slides and clicks into place at the top of the mod that houses the coil contacts and microphone for the auto draw function. The device vibrates when you put the pod in with a coil, indicating a successful connection. Unfortunately, there is no setting to disable the fire button or to set the device on auto-draw only. I hope Uwell can incorporate that feature in future devices as it really helps to avoid accidental firing when the device is in one’s pocket or purse. 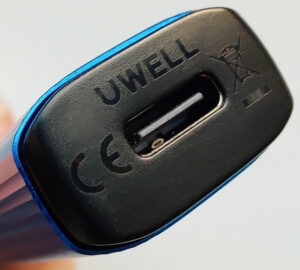 Other things to note about the haptic feedback featured by the Caliburn G2 is that the device will vibrate for different warnings, like when the fire button is engaged for more than 8 seconds or for when the battery is full.

Speaking of battery, the LED light employs the familiar red-blue-green system to indicate battery life remaining (30% or less, 30%-60%, 60% and above, respectively). 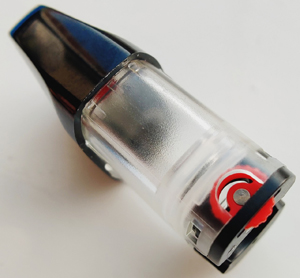 The pod is made from clear plastic which I love (I never really got into tinted pods, my eyes are bad enough as they are!). The mouthpiece comes off by pushing it off the pod from one side, revealing the fill hole atop the pod. Refilling with standard e-liquid bottles was never a problem in my tests.

The mouthpiece, although of a flat style, was really comfortable to use as it tapers narrowly to the top. The coils press fit from the bottom, and I’ve had no leaking issues with either coil. I did find, however, that the coils tended to flood a little if a filled pod is left standing for a few hours (I used 50/50 nicotine salts). So, that prompted me to use a 60/40 freebase e-liquid which got rid of the flooding. This is what I’d call a mini-issue, being that a leak would have been a major issue. Simply tap the pod upside down a few times on a tissue to rid of the excess e-liquid, and you’ll be good to go again!

But the star of the show (pod) for me was the adjustable airflow via that tiny red wheel! I was dubious at first, being let down by other pod systems before that promised true control of airflow… 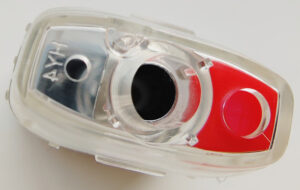 Not the Caliburn G2 though! This little thing does actually and effectively control airflow! I was able to achieve different levels of airflow by turning this wheel, from a very tight MTL to a loose MTL/restricted DTL. I was really impressed by this (again, having no great expectations) and if I were Uwell, I would probably have marketed the Caliburn G2 emphasising this feature rather than the haptic feedback. It is THAT good!

I should also mention that the Uwell Caliburn G2 pod is also compatible with all the Caliburn G coils, which is great for those who already have this coil.

All in all, I was very satisfied with the pod and its performance. Having no leaks or even condensation plus truly adjustable airflow – I’m sold! 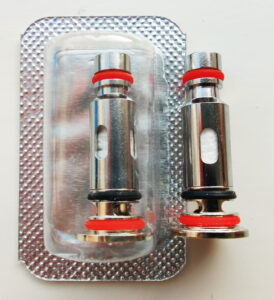 The pre-installed 1.2-ohm coil (9-13W) gave a flavourful (7/10) and warm-ish vape. Yes, warmish and honestly, warmer than I expected for a coil over 1.0 ohms. This is the coil for new switchers that want that cigarette-like draw and warmth. It was able to produce the flavours of e-liquids I know very well, and I did not miss a flavour note.

Having said all that, the 0.8-ohm coil (13-18 W) was better for me in terms of flavour (8/10) and warmth. As I’ve been vaping for a few years, I prefer quite warm MTL vaping nowadays and so this is the coil for me! As with the 1.2-ohm coil, flavour production is on point and I’ve been really happy with it.

In terms of coil longevity, both coils are still going like they are still new, two weeks of testing in! This is quite impressive as nowadays, I feel pretty lucky if I get a full week-and-a-half off a coil used with nicotine salts. Again, I am very happy with this aspect of the kit too!

No question, a Yay for me as far as starter kits go. You will not go wrong in picking the Uwell Caliburn G2 as your first vape kit. It’s so simple to use and maintain and gives you an excellent vaping experience. I would also recommend this kit for experienced vapers that just want something portable and yet won’t compromise on flavour. Indeed, this is the kit I will pick up when out and about!

It’s definitely an improvement over its predecessor with the airflow control – that’s what clinched it for me!

My warmest appreciation again to Joyi and Sourcemore.com for sending this kit for my review! To pick up the Caliburn G2, check out the links to Sourcemore at the start of the review, using the code there at checkout for a nice discount.