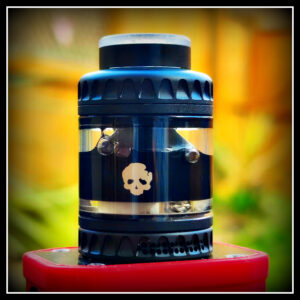 Dovpo and Vaping Bogan Blotto Max: Is this Big Boy Atty Worth It?

How are we all doing, guys? Today we will be looking at a quite recent RTA release in the market – the Blotto Max RTA by Dovpo and the Vaping Bogan!

This device was sent to me for review purposes by the very generous folks at Sourcemore.com (much love, Joyi!). In case you are not yet familiar with Sourcemore, they are one of the biggest vape retailers based out of China. They sell pretty much everything you could ever need for vaping, and they run crazy sales from time to time.

In the case of the Blotto Max RTA, Sourcemore once again delivered for us here by providing a code exclusively for your use should you pick this up from them! Use JEN at checkout to get a significant discount – and that is another reason to thank Sourcemore! Just to be clear as I acknowledge that my name is the code – I do not benefit in any way if you use this code, so rest assured that my review will remain honest as always.

Dovpo has been around a relatively long time, starting in 2012, and are staying strong and relevant in the vaping scene. Through the years, they have been popular in the vaping community, perhaps not in the mainstream majority but amongst hobbyist vapers mostly. I say that because the overwhelming majority of their products are mods of varying types (DNA, mechs, squonks, potentiometers), and most of their atomisers are rebuildables. The most notable of these rebuildables are the Blotto atomisers, made in collaboration with YouTuber (the) Vaping Bogan.

It’s been a good couple of years or so since the original Blotto RTA was released, followed by the Blotto Mini. But in recent months, there seemed to be a spate of updates or new creations under the Blotto line including the Blotto Single Coil, Blotto 1.5, and indeed, the Blotto Max.

So, is the Blotto Max drastically different from the previous Blottos, and how does it stack up within the 28mm atomiser market? Let’s find out!

As always, my review will be based on my experience in using this device as an average vaper.

I was sent the retail version of the Dovpo Blotto Max, containing: 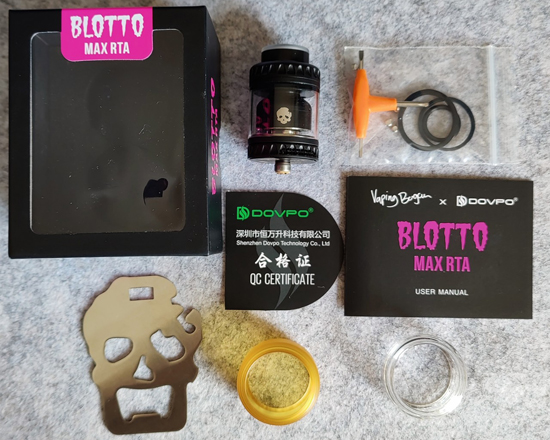 The Dovpo Blotto Max comes in a compact box in black with pink accents and print, as is the style of previous Blottos. The tank can easily be seen through a plastic film up top, and there are actually cut-outs for grip on the box which makes it very easy to open. Sometimes, it’s the little things that make quite an impact- love this about the packaging!

The tank is encased in a foam tray which is super, duper tight to the rest of the box. It does have a ribbon handle but Dovpo could have shaved a millimetre off the foam tray to make everything fit nicely. But hey, no big deal. The mentioned accessories and paperwork can then be found once the foam tray is removed, and the spare glass and spare ultem are placed nicely at the bottom of the box. For everything, this kit contains, Dovpo have packed the atty accessories comprehensively and thoughtfully.

My only “wish” about the packaging (apart from a less tight tray) is the inclusion of coils and wick. That way, one would truly have everything needed to get started apart from clippers/scissors. Maybe there wasn’t enough space to fit everything in? I’m not sure, but it having coils and cotton out of the box would have been a major pro for me.

B. Aesthetics and Mechanics

Now, the atomiser itself looks beautiful! For a 28mm atty, it really doesn’t appear to be that big, owing to the fact that it’s not a tall tank. It comes with a standard 810 drip tip and as such, any similar drip tips would fit the tank. It is two-toned (top is frosted) in the version I received, which I must admit looks pretty darn cool! Looks aside, the drip tip is very comfortable to use and I have no issues with it. 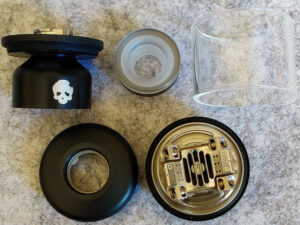 I received the black colour, but the tank also comes in stainless steel and gunmetal. The colour and finish are done so well and in matte which helps to make it look clean. Branding is very minimal on this atty with only the trademark skull found on it. I really like this because the design itself is very unique; no one should mistake it for anything other than a Blotto due to its bottle cap design.

The machining was also very well done: there is nothing sharp and no threads that crunch. O-ring tolerances are pretty good too; everything just fits perfectly.

The top cap locks and unlocks via a quarter-turn (my favourite fill method) in either direction; that is to fill and close the tank. The kidney-shaped fill holes are massive- one will not have any difficulties refilling, even with glass droppers.

The airflow ring is at the atomiser base, with airflow holes done in a sort of honeycomb style on either side of the ring. There are full stops to the airflow ring, and I have had no issue in turning the ring even when on a mod. The airflow ring has enough restriction to make it an effective tool in controlling airflow, and also enough texture for grip when adjusting on the fly.

The base attaches to the tank via threads. The build deck is done in a definite Blotto style, with angled coil lead holes, big airflow holes underneath the coil, and airflow posts to hit the sides of the coils.

With the size of this deck, one can fit two 3mm ID exotic coils here comfortably and easily, and I suppose this is one of the advantages offered by the Blotto Max versus other Blottos. Could one fit in coils larger than that? I suppose so, but to be honest, I don’t really see any reason why as this tank performs so well even with dual 3 mm ID coils. Now, could the tank be used as a single coil RTA? Technically, yes, but why though? This atty isn’t going to achieve its full potential in a single-coil configuration, even if it’s a 4 or 5 mm ID coil. There would be far too much wastage of airflow that will affect the quality of the vape just because of the build deck surface area. 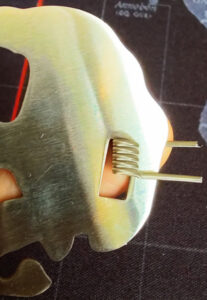 I built this atty using the tools found in the kit, and yes that means using the provided coil tool. I snapped a photo here to show how to use the coil cutting tool (trims coil leads to around 4-5mm).

Installing the coils, once the leads are pre-cut, is super easy. Just whack them in, tighten, and then position. My only gripe about the build deck is the use of flathead screws. With the angled nature of the coil lead holes, I felt that grub screws would have been more apt (plus they last longer too). Additionally, a couple of the post screws were in there really tightly, and it took a more than expected amount of effort to unscrew them. I hope Dovpo can look into this because if the screws become stripped out of the box, that pretty much renders the deck (and therefore, atty) unusable.

Another point to mention about the build deck, and I want to be clear that this is not a con, is that the space between the coil lead holes is fairly big. A five-wrap or so exotic coil should be OK, but for my own edification, I spaced my own coils to better cover the area and avoid hotspots as well. 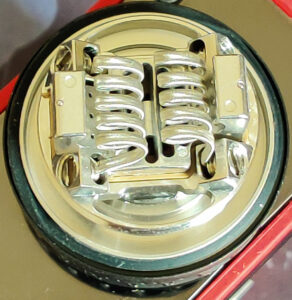 Once the coils are installed and pulsed, insert an adequate amount of wick, and what I mean by that is not too tight and not too loose to avoid dry hits or leaks respectively. Trim the wicks to about the edge of the base. With my own build, I used 3 mm shoelace cotton and didn’t really comb it out so much as the wick wells are large enough. I made sure that the wick ends fell just short of the floor of the build deck and did not touch it, again to ensure that the atomiser will wick effectively.

Putting it all together and juicing the atomiser up, oh my, what an experience in terms of flavour! I used a dual Alien Clapton coil build that ohmed out to 0.17, and the vape I got from this build with the Blotto Max was just phenomenal! Vaping it at just 65W, I got a very dense flavour and adequate warmth for a DL vape, even with the airflow fully open. And speaking of the airflow, this has got to be up there in terms of the smoothest airflows I have ever experienced. There’s no whooshing or whistling, just a very uniform intake of air with every puff! The airflow is also plentiful enough for cloud chuckers, that’s for sure. 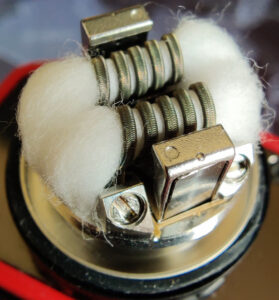 What all of this tells me is that Dovpo and The Vaping Bogan has got the Blotto Max spot on in that for one, the shorter size effectively maximises the flavour. And, although I don’t precisely know what practical changes they have made with the airflow control, the way the air comes in from the bottom and sides of the build deck really makes a difference in terms of flavour and warmth.

Lastly, I am super happy to report that I did not experience any leaking with this RTA despite it having a bottom airflow. And since this atty is quite forgiving on the wicking, leaking can be avoided when it is wicked correctly.

Although the Blotto Max retains most of the signature features of the original Blotto, it is still a bit of a different atomiser to me, and a much-improved one at that. There are a few mainstream 28mm atomisers out there, and the Blotto Max can easily compete with these just on its performance alone.

Easy to build, great flavour, dense clouds, this one gets a solid Yay from me! This is an RTA that I will continue to use long after my review is over, that’s for sure!

I’d recommend these for experienced vapers that want that (almost) RDA level of flavour without the hassle of frequent refills.

Check out the links to purchase the Blotto Max RTA by Dovpo and Vaping Bogan at the start of the review and make sure you use that code for a great discount!

Once again, my deepest thanks to Sourcemore.com for providing this RTA for my review!