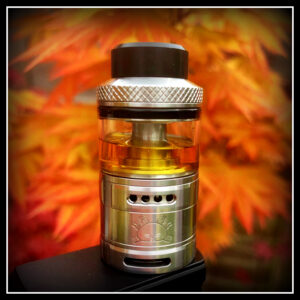 A review today for a recent single coil RTA; this is the Fat Rabbit Solo RTA by Hellvape. This was supplied by the gang at Sourcemore. They are one of the biggest and best vape stores out of China with pretty quick shipping overseas and cheaper prices than most vape outlets closer to home. If you haven’t already, go check them out when in the market for new vape stuff, as you’ll find all the latest and greatest on their store as well as discounts and sales.

Let’s jump in and see what the Fat Rabbit Solo is all about. 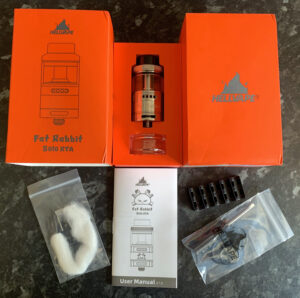 The Fat Rabbit Solo RTA by Hellvape comes in a bright orange cardboard box with an outer sleeve. On top of the sleeve is a graphic of the tank along with a printed title and branding. The left side of the sleeve has the printed title and the right side has printed branding and Hellvape’s social media info. The bottom of the sleeve includes printed features of the Fat Rabbit Solo, box contents and contact info for Hellvape. There is also a label stuck on the bottom that has the serial number.

Printed on the main box is the slogan “Evoke your Vaping Genius” and on the other side has two labels. One includes the bar-code and colour of the tank inside and the other is a scratch-for-authenticity label.

Contents inside the box are:

The Fat Rabbit Solo RTA by Hellvape is a single coil RTA with a 25mm diameter. It is 55mm high with a juice capacity of 4.5ml (2ml for TPD edition) and weighs in at 70g. 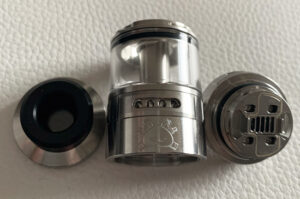 At the top of the tank is a removable 810 drip tip inserted into the top cap with knurling around the edge. This top cap quarter turns to remove where it reveals the fill ports for E-liquid. Below the top cap sits the chamber which is inserted into the middle glass tube. At the bottom sits the build deck and above is a side-airflow control ring. The deck also has airflow control, as the tank has both a bottom and side airflow system. The bottom chamber has an etched Fat Rabbit logo on one side with ‘Fat Rabbit’ etched on the other.

Hellvape claims that the RTA is anti-condensation by using an ‘innovative internal structure of 810 drip tip‘ which can prevent condensation. 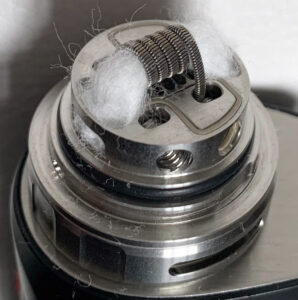 The Hellvape Fat Rabbit Solo uses a postless deck. There are 4 holes for coil posts on the deck, so being a single coil you have two configurations on the location of the coil, held with flathead screws within the base of the deck.

Situated in the middle is a grilled area for airflow and on each side is a raised area for the cotton wick to sit on. Below, on each side of the coil location are recessed pits to drop each end of the wick into. There are holes at the bottom for the juice to be drawn into to saturate the wick from the other side.

The deck is a generous size so should have no problems using a larger coil. To install the deck, it simply pushes up into the main tank with a quarter turn to lock and secure in.

The Fat Rabbit Solo in my opinion is a very decent single coil RTA. It’s a good size at 25mm so no problems with fitting on the top of most mods without overhang. It cosmetically looks good and easy when filling due to the very large fill area underneath the top cap.

The build deck is easy to add a coil build with plenty of space to work with. Simply snip the coil legs with the coil tool guide in the box. This way there isn’t an issue with having the coil legs too long or too short when screwing them into the deck. Cut the wick long enough to comfortably fit the ends into the juice wells and screw back the deck onto the tank with a quarter turn.

On the vape, the Fat Rabbit Solo RTA is full of flavour close to an RDA and the vapour production is immense. The dual airflow works how it should offering from a restricted DTL vape to a very wide open vape with both airflows open. With an RTA that packs a punch as much as this for a single coil, you really don’t miss a dual coil RTA.

I have seen a few things online in the recent past about leaking issues, but I didn’t experience that at all from the tank. It has been wicked a few times during use without any leaks from the airflow. I don’t know if that is down to luck more than experience, but I didn’t find it too fussy with wicking at all while being generous with the Cotton.

If you are in the market for a good single coil RTA and like tweaking your airflow exactly how you like it, then check out the Fat Rabbit Solo RTA by Hellvape. The links to purchase at Sourcemore are at the start of the review and it is currently just $24.39 (£19.69) if adding the code FATR1 at checkout. Thanks for reading! 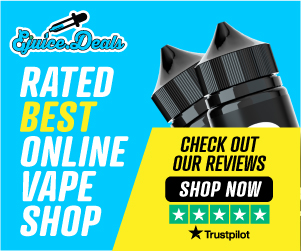 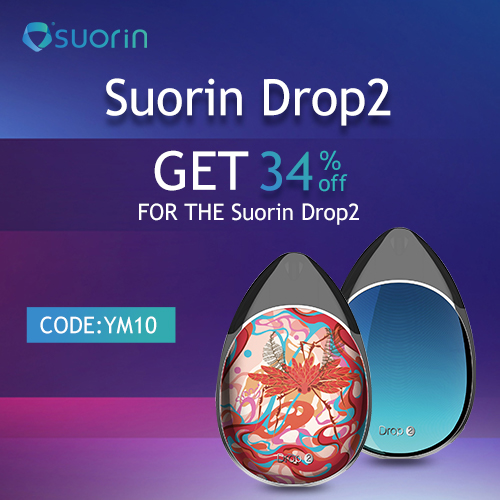