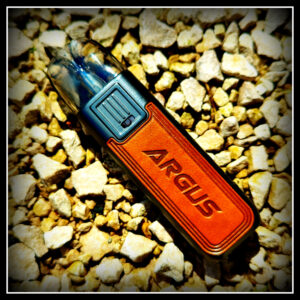 Yessur, we have another Argus to look at today, courtesy of Alice from Voopoo (thank you!) who has sent this kit to me for the purposes of a review.

In contrast to the last Argus I reviewed, the Argus GT II, which is a purely DL set-up that used TPP coils, the just-released Argus Pod Kit seems to be aiming for the MTL and RDTL vapers. With its elongated and slim form factor typical of pod kits, it is a world away from the Argus GT II.

Voopoo has released quite a few kits now under its Argus line since it launched around a couple of years back. In general, the Argus devices don’t look too dissimilar to the Drag series (if you are familiar with Voopoo’s different device lines), but they do have a sort of outdoorsy look about them. The Argus Pod Kit carries this same tradition, although does look to be a little more refined, I have to admit.

But does it perform as well as it looks? Let’s find out! 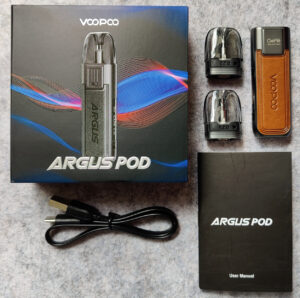 The kit comes in a black box with a coloured photo of the kit in front; and contents, kit features, Voopoo’s socials, and standard warning language written around it. A tray slides out, with the device and pod cartridges laid out neatly underneath an inner box containing kit accessories. It’s a simple yet classy kit presentation from Voopoo here. 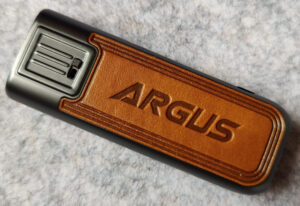 Now this one is quite tiny and lightweight, the kind that can easily fit and carry with the palm of your hand. It reminds me a little bit of the Voopoo Vinci Pod battery: that rectangular shape with rounded corners and sides. It’s made from a mix of zinc alloy and leather, with the leather being on the wide and flat faces. The Brown finish I received looked quite elegant if I’m honest, with the dark gunmetal colour of the frame contrasting nicely with the retro brown leather.

Being a Voopoo device, you mustn’t be surprised by big and bold branding, and this device is no exception. “Voopoo” and “Argus” adorn the leather sections in sizeable lettering. Some people may like it, but I for one always prefer understated branding. Even more so with the finish of this device, perhaps a contrast stitch design to the leather would look better than big embossed letters. But, that’s just my opinion. 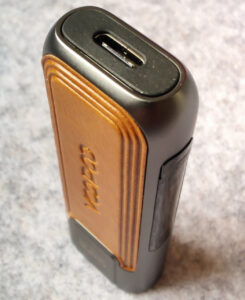 The top portion has the cradle where the pod sits, the contacts for the coil, magnet contacts, as well as the auto-draw switch. A USB-C port can be found at the bottom of the device. The OLED screen is on one side.

Despite being small, the OLED screen is clear, bright, and with very easy to read fonts. It can present 2 views to the user: the first one which shows battery life in bars and percentage, wattage, voltage, and ohm load; and the second one which shows “total puffs” and a “puff count”. But when I was using it, only the total puffs (the values in the middle of said view) were changing as I took my puffs. The puff count portion (values on the right-hand side) didn’t really change. I’m not sure if that’s because of a small fault in the sample device I was sent. In any case, it didn’t affect anything at all in my vaping experience as I usually only bother with total puff counts especially in a pod system, as it gives me an idea of coil/pod longevity. Operating the device is simple enough: 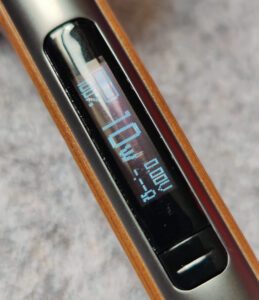 Airflow control is incorporated into the device via a slider system. There is a slightly protruding adjustment knob that you can slide back and forth to expose the airflow hole, as shown in the first picture in this section. The hole is relatively wide, so the travel of this slider is quite short. However, I found that this system of airflow control is very effective in that I could get a tight MTL with the hole almost closed, and a tight RDTL with it fully open. The knob stays in place too, even if the device is placed in my pocket as I move around. As a lover of airflow customisation, I have to laud Voopoo on this as they had created a great and effective way of controlling airflow!

The device fires quickly and is very responsive, whether I used the fire button or draw activation. There is a small difference in warmth though between auto and manual firing, but it is only slight that over time, I hardly noticed it at all!

The pod is made from PCTG and is only very lightly tinted, making it very easy to see e-liquid levels. Not only that, once it slides into the battery via magnets, it sits in such a way that the coil wick holes and therefore bottom of the pod is actually visible! No need to guess at all if you’re running low on e-liquid, which is always a good thing. 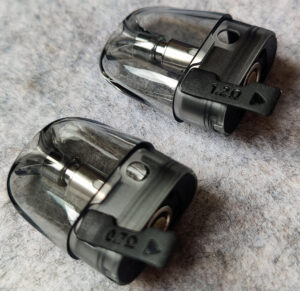 The duckbill mouthpiece narrows and thins towards the top. I don’t normally like wide and flat mouthpieces but this one was quite nice and very comfortable to use.

The fill hole is on the side but towards the bottom of the pod and is sealed by a rubber bung. The fill hole is generous enough for most e-liquid bottles, so I don’t expect (and didn’t experience) any problems on this front.

The base of the pod has 4 small airflow holes, directing the air toward the bottom of the installed coil and upwards. And I believe that’s what allows this kit to give great flavour! And speaking of…

The 0.7-ohm cartridge gave me a warm and pleasurable vape. I used it mostly in my preferred medium MTL draw, with the device airflow set to just around a millimetre wide. It gave me great flavour (7.5/10) and a smooth vape at 18W. I used 50/50 e-liquids in my testing as judging by the coil wick holes, it may not perform so well with thicker e-liquids.

The 1.2-ohm cartridge is geared towards classic MTL, and I did loosen up the airflow a little bit to get the draw I preferred at around 12W. Again, the flavour is good (7/10) and I can see this cartridge being preferred by MTL vapers. Subjectively though, I will always prefer a warm vape, which I get more from the 0.7-ohm cartridge.

For both pods, I did not experience any leaking whatsoever which is always a major pro as far as pod kits are concerned!

This depends on how you will use the kit and your vaping preference of course. I would recommend this kit for new vapers, given that the kit is very easy to use and maintain. It can give a decent MTL vape, but if you push for RDTL, you will find the vape to be rather on the cooler side.

Still, it’s a smart-looking kit that gives great flavour to the vaper. It’s a pleasure to vape with and at the end of the day, that’s all that we are all after.

The battery lasts a fair amount of time and charges quickly, and the auto-draw function works like a dream. The Argus Pod kit still gets a Yay from me!

To pick up the kit, head over to Voopoo’s website via the links at the start of the review. Once again, thanks to Voopoo for allowing me to test the Argus Pod Kit!