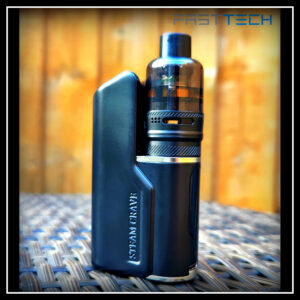 Oooh I do like me some side-by-side mods, especially those that are solid, slim enough, and yet can fit a 21700 battery. Yes, I do want it all (!) but it is the most practical set-up on a long trip with an MTL RTA to keep me vaping for a long time!

Enter the Steam Crave Hadron Lite Mod, which we will be looking at today to see if it fits the bill!

This mod was sent to me for review purposes by Fasttech.com (thanks, Annie!). Fasttech stocks a massive amount of vaping gear and supplies, even random spares you might need to make your kit whole again! So, do check them out for your vaping needs! Most ship for free or at low cost too.

Now, Steam Crave are no stranger to the blog or to me, having reviewed some of their hardware before. Their products usually cater not so much to the average vaper, but more so to hobbyists and collectors, especially with mid to high-range price tags and hardened looks typically accompanying their wares. All that being said, the Steam Crave Hadron Lite is a bit different from their previous releases, in my opinion anyway, as this one probably looks the most mainstream so far. That isn’t necessarily a bad thing though and I will tell you why!

I was sent the retail version of the Steam Crave Hadron Lite Mod packaging that contained: 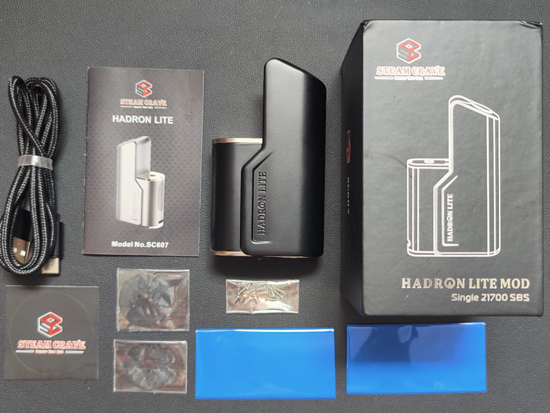 The thing with Steam Crave is that their black box typical packaging looks somehow plain, and almost cheesy when you take the graphics printed around it into account. It’s quite unassuming and underwhelming, however, the prize really is what’s inside. In any case, an illustration of the mod can be found at the top of this box, with the security and serial tags portion at the bottom and the mod colour choice indicated on the side. Like I said- plain.

The mod and its accessories are sat neatly inside the box, buttressed by foam inserts to hold them in place and protect them from deformation. This is all well and good, but again, Steam Crave used that red felt lining the foam which doesn’t really scream “high-end” to me.

If Steam Crave will listen to little old me, I’d say that they’re doing OK with packaging but they can definitely level it up by letting go of that red velvet-lined foam, and perhaps modernising the graphics on their black box. They don’t need to lather it with big and bold letters. I’d rather they keep the black box classic look, with an illustration of the device up top along with their brand, and box contents plus all else printed at the back. After all, the “unboxing” does add to the pleasant experience of buying new gear, and vapers can judge kits on their outer packaging alone- all very good reasons for Steam Crave to improve on this point. 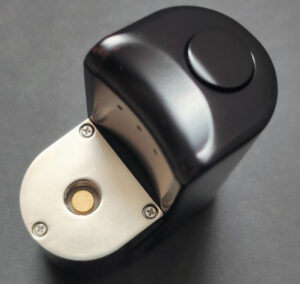 The mod, especially in Black, looks ridiculously solid! It is made from zinc alloy, so you know this mod’s frame won’t break easily and is likely to stand the test of time. The 510 platform appears to be screwed onto the mod, and the fire button is up top, interestingly. With the location of the firing button, I’ve had no real issue using either my thumb or forefinger to fire. However, you may need to adjust your grip a little bit when using the mod with a bottom airflow atomiser and firing the mod with your thumb. Considering the natural grip, some of your fingers may obstruct the airflow holes when using the mod this way.

Saying all that, however, this mod is extremely ergonomic; with its curved edges and smooth surface, it feels ridiculously comfortable in the hand! Branding is quite minimal too, adding up to the mod’s classic and classy look. 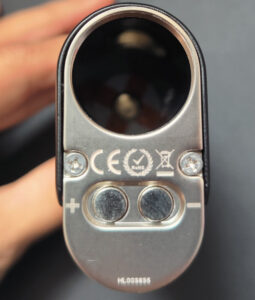 The battery is installed from the bottom with a threaded stainless steel battery door that goes in and out smoothly. This door has vent holes, as does the part of the mod where the positive side resides for extra safety. Polarity marking is present and clear, albeit the positive end is the only one with the mark.

The adjustment buttons as also at the mod’s bottom portion and just beside the battery door. Each button is clearly marked as + and -, so you’d always know which way you’re going as you press them. Like the fire button, the adjustment buttons are clicky and have very little play. These are also placed very well into the base of the mod: none of the buttons sticks out which contributes to the mod’s stability when upright. 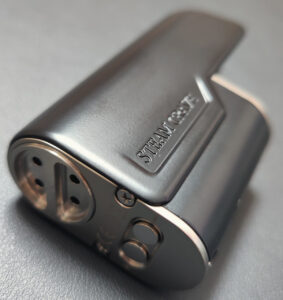 Beneath the 510 platform is the small convex screen that displays basic vaping data like battery life as a diminishing bar, ohm load, puff counter, power/temperature level selected, volts, and duration of puff. The screen might appear basic, and although small, I think it is perfect for the mod’s design so that the vaper’s attention is more on the entire mod itself and not just on a colourful screen. One niggly bit about the screen though is its curvature: I understand why Steam Crave did this (so that the screen follows the shape of the mod) but it does make the screen a little more prone to scratches.

Operating the mod is straightforward: 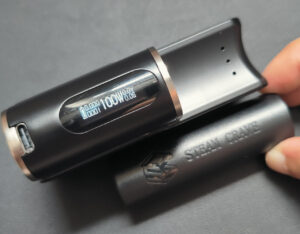 As far as performance goes, the mod lives up to expectations! It fires quick enough and with sustained power, even with diminishing battery life. It does very well in all modes, with its performance that can be adjusted in 1W increments in power mode, 0.1V in voltage, and 5 degrees Fahrenheit/Celsius in TC. Do note, however, that adjustments do not round robin either end, so always check your screen before taking a puff (I mean, after the mod’s been in your bag or pocket and it was unlocked).

The battery usage/drain of the mod is right around what I expected too. Vaping at 60W mostly, I was able to get more than a day out of my 21700 battery. Bear in mind though that I don’t chain vape in DL!

I couldn’t really find figures for battery charging, but I estimate the mod to have around a 2A charge rate, judging by how quickly my cells charged up to full.

All in all, I was very pleased and then some with the Steam Crave Hadron Lite Mod! And for that, I would give this kit a resounding Yay, especially for those who like SBS mods. It looks and feels solid, and with its classic look, can easily pair with most atomisers on the market. Well, those that have 25mm diameters or less!

I mentioned in my review introduction that this mod looks to be the most mainstream out of the Steam Crave products that I am aware of, and that is largely due to its simple block design and minimal branding. It definitely looks like a Steam Crave product, without necessarily the imposing shape and knurls we may have seen in their other products.

This mod is very comfortable to vape with, and something that I will definitely continue to use in daily life. Sure, the packaging was nothing to write home about but at the end of the day, what matters most is what’s inside!

My sincerest thanks again to Fasttech for sending this mod for my review! To pick up the Hadron Lite mod, head over to Fasttech via the links at the start of the review.