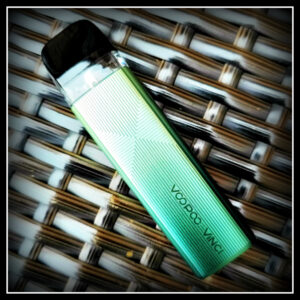 How’s everyone doing, folks? It’s been a while, but I am back with another hardware review courtesy of the kind people at Voopoo (thanks, Nical!) who have sent this kit to me for the purposes of a review.

This time, we will be looking at another addition to Voopoo’s ever-growing Vinci line: the Vinci Pod SE. Yes, it is another starter kit in the series, but does it actually bring something new to the market? Let’s find out! 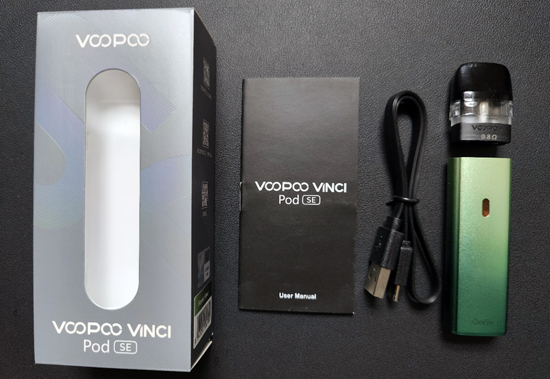 The packaging is simple and neat, without a lot of excess space inside (if you’ve been reading my reviews for a while, you’ll know how much I dislike wasted space!). Kit contents & features, manufacturer information, and Voopoo’s socials adorn the box. The kit sits inside a plastic tray, which in turn sits on the kit accessories.

Overall, the packaging is basic but effective. However, I did wish that the kit came with 2 pods, as looking at Voopoo’s website, a 1.2 ohms Vinci Series V2 Cartridge is planned (or has it been released?). I’ve said time and time again that kits should come with 2 pods or even coils as standard because if one pod/coil is faulty, then another pod/coil can be used by the vaper. But moving on…

This is one good-looking device, especially in the Forest Green sample I received. The body is made from hardy aluminium alloy and is finished ever so smoothly. There is a pattern of lines decorating the back of the device where typical Voopoo branding is. 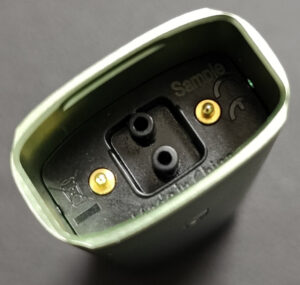 The pod clicks into place at the top of the device where the pod coil contacts are located as well as the auto-draw microphone. There is an LED light that indicates a number of things for the battery including battery life, pod placement (flashes), charging (pulses and then fully lights up when fully charged), and other patterns to indicate safety alerts.

With no airflow control or any buttons for firing or adjustments, it’s a device that is so easy to use. The auto-draw also engages very quickly with no significant lag when taking a puff.

The USB-C port is on the side of the mod which allows for upright charging, which is a pro in my book as some vapers may not remove the pod whilst charging (vapers should avoid having pods or atomisers laid on its side to avoid leaking or flooding). 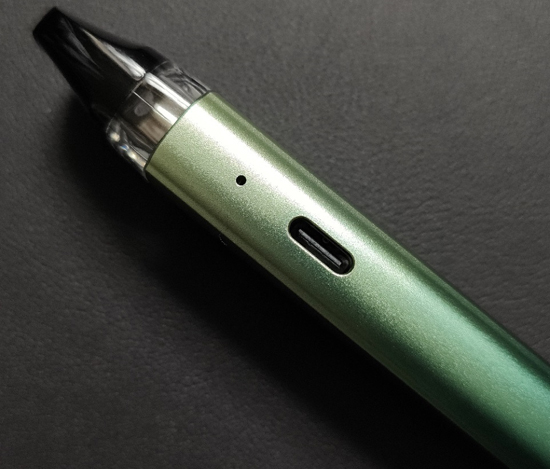 The Vinci Series V2 Cartridge is Voopoo’s newest refresh of this pod. It is top fill by pulling the mouthpiece off to expose the fill port (and then placing it back with a click to seal the pod). There is also another hole on the opposite side of the fill port to balance the pressure inside the pod when filling.

The pod is clear and sits on the battery quite high, making it very easy to see e-liquid levels even when installed on the device. The 0.8-ohm pod deliver a good, punchy flavour from the nicotine salts I’ve used, as well as a nice and warm enough vape. 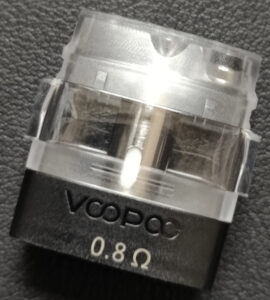 The only thing I’d say is that for an MTL vape, it is more on the loose side. I would have preferred a draw between tight to medium MTL, to really simulate the draw from cigarettes. Perhaps the 1.2 ohms pod (not included in the kit) might give a tighter draw, but I can’t say anything to that without having tested this pod myself.

Crucially though, I’ve not experienced any leaking or even any condensation from this cartridge which makes it quite impressive!

On its own, the Vinci Pod SE Kit is a decent starter system, perfect for those coming off disposable vapes we see all around us now. I am not sure how much it will cost, but I would imagine that it would be a more cost-effective system to have versus the continuous purchase of disposables. The kit delivers good flavour and is very simple to operate.

But taking the wider vape market as a whole, I have seen this filling system before from other companies. Perhaps Voopoo made the Vinci Series V2 Cartridge to stay competitive within the pod market, by offering a leak-free experience in addition to decent flavour.

My biggest thanks again to Voopoo for allowing me to review this kit! To see more or to purchase the Vinci Pod SE Kit, head over to the Voopoo website via the links at the start of the review.